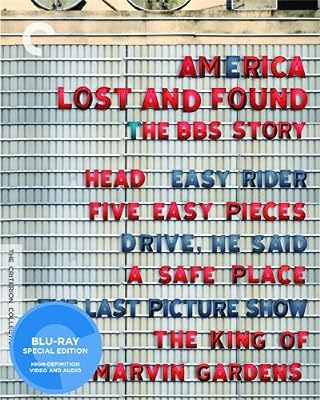 Price: $62.49
As of 2022-08-19 11:28:01 UTC (more info)
Product prices and availability are accurate as of 2022-08-19 11:28:01 UTC and are subject to change. Any price and availability information displayed on http://www.amazon.com/ at the time of purchase will apply to the purchase of this product.
Availability: Not Available - stock arriving soon
Buy Now from Amazon
Product Information (more info)
CERTAIN CONTENT THAT APPEARS ON THIS SITE COMES FROM AMAZON SERVICES LLC. THIS CONTENT IS PROVIDED 'AS IS' AND IS SUBJECT TO CHANGE OR REMOVAL AT ANY TIME.

Like the rest of America, Hollywood was ripe for revolution in the late sixties. Cinema attendance was down; what had once worked seemed broken. Enter Bob Rafelson, Bert Schneider, and Steve Blauner, who knew that what Hollywood needed was new audiences—namely, young people—and that meant cultivating new talent and new ideas. Fueled by money made from their invention of the superstar TV pop group the Monkees, they set off on a film-industry journey that would lead them to form BBS Productions, a company that was also a community.

The innovative films produced by this team between 1968 and 1972 are collected in this box set—works created within the studio system but lifted right out of the countercultural id, and that now range from the iconic (Easy Rider, Five Easy Pieces, The Last Picture Show) to the acclaimed (The King of Marvin Gardens) to the obscure (Head; Drive, He Said; A Safe Place).

Head (1968)
Hey, hey, it’s the Monkees... being catapulted through one of American cinema’s most surreal '60s odysseys. In it, Mickey Dolenz, Davy Jones, Michael Nesmith, and Peter Tork become trapped in a kaleidoscopic satire that’s movie homage, media send-up, concert movie, and antiwar cry all at once. Head escaped commercial success on its release but has since been reclaimed as one of the great cult objects of its era.
(85 minutes, color, monaural/surround, 1.78:1 aspect ratio)

Five Easy Pieces (1970)
Jack Nicholson plays the now iconic cad Bobby Dupea, a shiftless thirtysomething oil rigger and former piano prodigy immune to any sense of romantic or familial responsibility, who returns to his childhood home to see his ailing estranged father, his blue-collar girlfriend (Karen Black, like Nicholson nominated for an Oscar) in tow. Moving in its simplicity and gritty in its textures, Bob Rafelson’s Five Easy Pieces is a lasting example of early 1970s American alienation.
(98 minutes, color, monaural, 1.85:1 aspect ratio)

Drive, He Said (1970)
Based on the best-selling novel by Jeremy Larner, Drive, He Said is free-spirited and sobering by turns, a sketch of the exploits of a disaffected college basketball player and his increasingly radical roommate, a feverishly shot and edited snapshot of the early '70s (some of it was filmed during an actual campus protest). Jack Nicholson’s audacious comedy (starring Bruce Dern and Karen Black) is a startling howl direct from the zeitgeist.
(90 minutes, color, monaural, 1.85:1 aspect ratio)

A Safe Place (1971)
In this delicate, introspective drama, laced with fantasy elements, Tuesday Weld stars as a fragile young woman in New York unable to reconcile her ambiguous past with her unmoored present; Orson Welles as an enchanting Central Park magician and Jack Nicholson as a mysterious ex-lover round out the cast. A Safe Place was directed by independent cinema icon Henry Jaglom.
(92 minutes, color, monaural, 1.85:1 aspect ratio)

The Last Picture Show (1971)
The Last Picture Show is one of the key films of the American cinema renaissance of the '70s. Set during the early '50s in the loneliest Texas nowheresville to ever dust up a movie screen, this aching portrait of a dying West, adapted from Larry McMurtry’s novel, focuses on the daily shuffles of three futureless teens—enigmatic Sonny (Timothy Bottoms), (Jeff Bridges), and desperate-to-be-adored rich girl Jacy (Cybil Shepherd)—and the aging lost souls who bump up against them in the night like drifting tumbleweeds. This hushed depiction of crumbling American values remains the pivotal film in the career of the invaluable director and film historian Peter Bogdanovich.
(126 minutes, black and white, monaural, 1.85:1 aspect ratio)

The King of Marvin Gardens (1972)
For his electrifying follow-up to the smash success of Five Easy Pieces, Bob Rafelson dug even deeper into the crushed dreams of wayward America. Jack Nicholson and Bruce Dern play estranged siblings David and Jason, the former a depressive late-night radio talk show host, the latter an extroverted con man; when Jason drags his younger brother to a dreary Atlantic City and into a real-estate scam, events spiral into tragedy.
(104 minutes, color, monaural, 1.85:1 aspect ratio)

All About Eve (Two-Disc Special Edition)