Astaire & Rogers Collection, Vol. 2 (Flying Down to Rio / The Gay Divorcee / Roberta / Carefree / The Story of Vernon and Irene Castle) 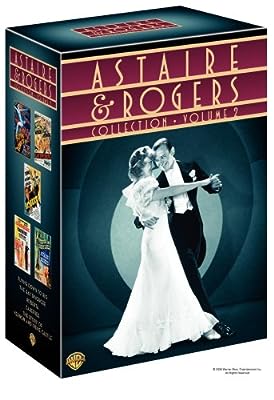 Price: $59.98
As of 2023-02-01 20:29:04 UTC (more info)
Product prices and availability are accurate as of 2023-02-01 20:29:04 UTC and are subject to change. Any price and availability information displayed on http://www.amazon.com/ at the time of purchase will apply to the purchase of this product.
Availability: Not Available - stock arriving soon
Buy Now from Amazon
Product Information (more info)
CERTAIN CONTENT THAT APPEARS ON THIS SITE COMES FROM AMAZON SERVICES LLC. THIS CONTENT IS PROVIDED 'AS IS' AND IS SUBJECT TO CHANGE OR REMOVAL AT ANY TIME.

Flying Down to Rio:Aviator and band leader Roger Bond is forever getting his group fired for flirting with the lady guests. When he falls for Brazilian beauty Belinha de Rezende it appears to be for real even though she is already engaged. His Yankee Clippers band is hired to open the new Hotel Atlantico in Rio and Roger offers to fly Belinha part way home. After a mechanical breakdown and forced landing Roger is confident and makes his move but Belinha plays hard to get. She can't seem to decide between Roger and her fiance Julio. When performing the airborne production number to mark the Hotel's opening Julio gets some intriguing ideas...The Gay Divorcee:Mimi Glossop wants a divorce so her Aunt Hortense hires a professional to play the correspondent in apparent infidelity. American dancer Guy Holden meets Mimi while visiting Brightbourne (Brighton) and she thinks he is the correspondent. The plot is really an excuse for song and dance. The movie won three Academy nominations and the first Oscar for Best Song: "The Continental" a twenty-two minute production number.DVD Features:Available Subtitles: English Spanish FrenchAvailable Audio Tracks: English (Dolby Digital 1.0)Includes:Flying Down to Rio (1933)The Gay Divorcee (1934)Roberta (1935)Carefree (1938)The Story of Vernon and Irene Castle (1939)Format: DVD MOVIE Genre: TELEVISION/CLASSIC Rating: UNRATED UPC: 012569764385 Manufacturer No: 76438

2006 marks the arrival of five Fred Astaire and Ginger Rogers films (Flying Down to Rio, The Gay Divorcee, Roberta, Carefree, and The Story of Vernon and Irene Castle) on DVD after the first five were released in 2005. If you only want the five new films, pick up this Astaire & Rogers Collection, Vol. 2 as a bookend to your Astaire & Rogers Collection, Vol. 1. Or you can get the big package, Astaire & Rogers Ultimate Collector's Edition, which contains all 10 films plus a CD, a bonus DVD with the documentary Astaire and Rogers: Partners in Rhythm, press-book replicas, and some other material. If you want the big package with the extra stuff but already bought the five films in 2005, you can get the Astaire & Rogers Partial Ultimate Collector's Edition, which includes everything listed above except the actual discs of those first five films.

Flying Down to Rio (1933) headlined Dolores Del Rio and Gene Raymond, but it was the fourth- and fifth-billed stars who would rewrite cinematic history. Astaire and Rogers had limited screen time, but were still able to establish many of the trademarks of their later films. The heart of the film is "The Carioca," a company dance extravaganza in which they take the floor together for the first time; their eyes meet and their foreheads touch. Their dance lasts only a few minutes, but it was the highlight of the film and audiences wanted more. The Gay Divorcee (1934) is their best early picture, a loose adaptation of Astaire's stage show, The Gay Divorce. The only song retained for the movie is Cole Porter's smash hit "Night and Day," which is the setting for a sublime pas de deux between Fred and Ginger. The closer is the sprawling 17-minute ensemble number "The Continental." Roberta (1935) was a step backward, with too much time spent on 1930s Parisian fashion and the romance between top-billed Irene Dunne (who gets the best Jerome Kern ballads, "Yesterdays" and "Smoke Gets in Your Eyes") and Randolph Scott. But as the second-banana couple Astaire and Rogers still get a tap battle, a romantic duet, and plenty of comic banter.

The eighth and ninth entries in the series tried some different approaches, with the underrated Carefree (1938) more of a comedy vehicle for Ginger (yet still including some fine dances and Irving Berlin songs as well as their first onscreen kiss) and The Story of Vernon and Irene Castle (1939) portraying the pair as historical dancing stars and using a score of turn-of-the-century standards. --David Horiuchi

A Day at the Races