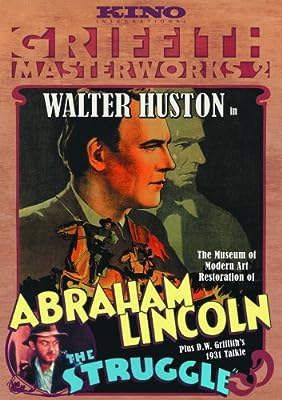 Price: $6.65
As of 2023-02-01 00:48:29 UTC (more info)
Product prices and availability are accurate as of 2023-02-01 00:48:29 UTC and are subject to change. Any price and availability information displayed on http://www.amazon.com/ at the time of purchase will apply to the purchase of this product.
Availability: Not Available - stock arriving soon
Buy Now from Amazon
Product Information (more info)
CERTAIN CONTENT THAT APPEARS ON THIS SITE COMES FROM AMAZON SERVICES LLC. THIS CONTENT IS PROVIDED 'AS IS' AND IS SUBJECT TO CHANGE OR REMOVAL AT ANY TIME.

The silent cinema's renowned pioneer, D.W. Griffith, directed only two sound features: Abraham Lincoln (1930) and The Struggle (1931), both collected on this DVD. Returning to the historic era of his greatest success, Griffith paid homage to the sixteenth President in this moving drama starring Walter Huston (The Treasure of the Sierra Madre). Focusing on Lincoln's personal tragedies, as well as his great accomplishments, Griffith's film depicts the American icon with a sensitivity and grace rivaled only by John Ford's Young Mr. Lincoln. A departure from the historical super-productions for which he was known, The Struggle was an intimate drama of an American everyman who falls victim to the debilitating affliction of alcoholism. No stranger to the destructive influence of drink, Griffith pulls no punches in dramatizing its potential horrors, especially in the terrifying climax when Jimmie, tormented by delirium tremors, attacks his young daughter (Edna Hagan) in the hovel that was once their happy home. Abraham Lincoln has been mastered in HD from the Museum of Modern Art's 35mm restoration of Griffith's historical epic. The Struggle was remastered in HD from a 35mm archive print from the Raymond Rohauer Collection.