W.C. Fields Comedy Collection, Vol. 2 (The Man on the Flying Trapeze / Never Give A Sucker An Even Break / You're Telling Me! / The Old Fashioned Way / Poppy) 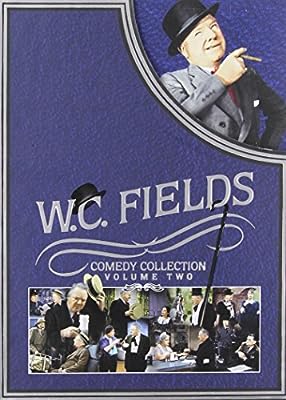 Price:
As of 2022-12-06 14:33:31 UTC (more info)
Product prices and availability are accurate as of 2022-12-06 14:33:31 UTC and are subject to change. Any price and availability information displayed on http://www.amazon.com/ at the time of purchase will apply to the purchase of this product.
Availability: Not Available - stock arriving soon
Buy Now from Amazon
Product Information (more info)
CERTAIN CONTENT THAT APPEARS ON THIS SITE COMES FROM AMAZON SERVICES LLC. THIS CONTENT IS PROVIDED 'AS IS' AND IS SUBJECT TO CHANGE OR REMOVAL AT ANY TIME.

Legendary actor and entertainer W.C. Fields is an American comedy treasure - a headliner who always left audiences laughing for more of his sharp-tongued one-liners, slapstick shenanigans and notoriously caustic wit. Now you can catch more of his unique comedic style in five of his most uproarious films: You're Telling Me!, The Old Fashioned Way, Man on the Flying Trapeze, Poppy and Never Give a Sucker an Even Break. Loaded with classic comedy routines, the W.C. Fields Comedy Collection: Volume Two is more of Fields at his finest, proving that the master of the one-liner can still keep fans laughing out loud!

It's a sobering thought that iconoclastic clowns such as W.C. Fields have fallen off the pop-culture radar (as evidenced by the fact that the studio felt compelled to insert the word comedy into the title of this collection). With his penchant for smoke and drink and dim view of such institutions as marriage and small-town America, Fields is just the jolting rebuke for these PC times. This bracing boxed set contains five potent films that are 100-proof Fields with a bonus documentary chaser. Two films capture Fields at his disreputable best. In The Old Fashioned Way (1934), Fields stars as the Great McGonigle, who heads a ragtag traveling repertory troupe that is always just one step ahead of the sheriff. Fields displays his mad juggling skills as well as his antipathy toward children in the classic scene with Baby LeRoy, which climaxes with McGonigle giving the bratty tot a swift kick in the diapers (try getting away with that today). In Poppy (1936), Fields reprises his famed stage role as con man supreme Professor McGargle, who joins a traveling circus and schemes to pass off his daughter as the heir to a fortune. Two other films present Fields as the Rodney Dangerfield of his day, getting absolutely no respect from shrewish wives, monstrous in-laws, and others who bedevil his so-called life, like the succession of four policemen in The Man on the Flying Trapeze, who near simultaneously issue him traffic tickets as Fields tries to attend a wrestling match. You're Telling Me (1934) reveals a somewhat softer side of Fields, who portrays a failed inventor driven to the brink of suicide.

This set also contains the essential Never Give a Sucker an Even Break (1941), in which Fields, as himself, attempts to sell an "impossible, inconceivable, incomprehensible" screenplay to the studio. Fields films are more deliberately paced than the Marx Brothers' manic romps, all the better to savor Fields' way with words ("what fulgent sunshine," "this mundane sphere"). To quote Slim Pickens in Blazing Saddles, he uses his tongue prettier than a $2, um, woman of ill-repute. This set's bonus is a 1965 television special that, despite its sweetened soundtrack and lame antics by hosts Wayne and Schuster, offers a cornucopia of classic clips and some genuine insights into Fields' comedy. A toast in anticipation of a Volume Three: May the next round contain Million Dollar Legs and Mississippi. --Donald Liebenson

Withnail and I (The Criterion Collection...