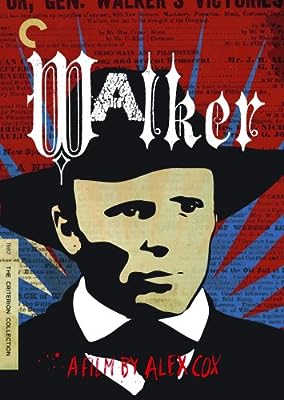 Price: $24.02
As of 2022-12-07 01:40:37 UTC (more info)
Product prices and availability are accurate as of 2022-12-07 01:40:37 UTC and are subject to change. Any price and availability information displayed on http://www.amazon.com/ at the time of purchase will apply to the purchase of this product.
Availability: Not Available - stock arriving soon
Buy Now from Amazon
Product Information (more info)
CERTAIN CONTENT THAT APPEARS ON THIS SITE COMES FROM AMAZON SERVICES LLC. THIS CONTENT IS PROVIDED 'AS IS' AND IS SUBJECT TO CHANGE OR REMOVAL AT ANY TIME.

A hallucinatory biopic that breaks all cinematic conventions, Walker, from British director Alex Cox (Repo Man, Sid & Nancy), tells the story of nineteenth-century American adventurer William Walker (Ed Harris), who abandoned a series of careers in law, politics, journalism, and medicine to become a soldier of fortune, and for several years dictator of Nicaragua. Made with mad abandon and political acuity and the support of the Sandinista army and government during the Contra war the film uses this true tale as a satirical attack on American ultrapatriotism and a freewheeling condemnation of manifest destiny. Featuring a powerful score by Joe Strummer and a performance of intense, repressed rage by Harris, Walker remains one of Cox s most daring works.

Special Features
* - New, restored high-definition digital transfer, approved by director Alex Cox
* - Audio commentary by Cox and screenwriter Rudy Wurlitzer
* - Dispatches from Nicaragua, an original documentary about the filming of Walker
* - On Moviemaking and the Revolution, reminiscences twenty years later from an extra on the film
* - The Immortals: behind-the-scenes photos
* - PLUS: A booklet featuring writings by film critic Graham Fuller, Wurlitzer, and Linda Sandoval