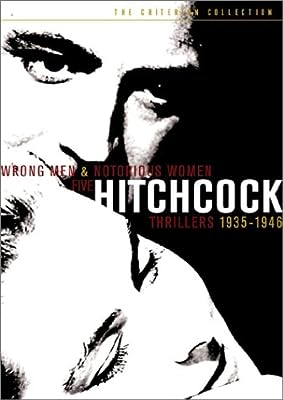 Price: $395.95
As of 2023-02-01 02:52:22 UTC (more info)
Product prices and availability are accurate as of 2023-02-01 02:52:22 UTC and are subject to change. Any price and availability information displayed on http://www.amazon.com/ at the time of purchase will apply to the purchase of this product.
Availability: Not Available - stock arriving soon
Buy Now from Amazon
Product Information (more info)
CERTAIN CONTENT THAT APPEARS ON THIS SITE COMES FROM AMAZON SERVICES LLC. THIS CONTENT IS PROVIDED 'AS IS' AND IS SUBJECT TO CHANGE OR REMOVAL AT ANY TIME.

A supreme technician and innovative stylist, Alfred Hitchcock always left his indelible stamp on his productions. From the wit, romance, and fast-paced action of 1935’s British-made The 39 Steps to the bittersweet blend of lush romance and spy- thriller in the 1946 Hollywood production Notorious, Hitchcock continually flaunted a peerless formal mastery as he capitalized on a wide variety of genres. In the 1940 Academy Award™ -winning Rebecca and 1945 psychoanalytic thriller Spellbound, Hitchcock also proved himself a keen surveyor of the human mind, incisively exploring the psychology of fear and sexual repression within the context of films that both entertained audiences of the day and ensured that his career would be one of the most illustrious in the history of cinema.

Oscar™ , Academy Award™ , and Academy Awards™ are the registered trademarks and service marks of the Academy of Motion Picture Arts and Sciences.

The 39 Steps (1935) is a prime example of the MacGuffin principle in action. Robert Donat is Richard Hannay, an affable Canadian tourist in London who becomes embroiled in a deadly conspiracy when a mysterious spy winds up murdered in Hannay's rented flat--and both the police and a secret organization wind up hot on his trail. It's classic Hitchcock all the way, a seemingly effortless balance of romance and adventure set against a picturesque landscape populated by eccentrics and social-register smoothies, none of whom is what he or she appears to be.

The Lady Vanishes (1938) begins innocently enough, as a contingent of eccentric tourists spend the night in a picture-postcard village inn nestled in the Swiss Alps before setting off on the train the next morning. Attractive young Iris (Margaret Lockwood) clashes with brash music student Gilbert (Michael Redgrave) when his nocturnal concerts give her no peace. True love is inevitable, but not before they are both plunged into an international conspiracy. Hitchcock effortlessly navigates this vivid thriller from light comedy to high tension and back again, creating one of his most enchanting and entertaining mysteries.

Rebecca (1940) is an ageless, timeless adult movie about a woman who marries a widower but fears she lives in the shadow of her predecessor. This was Hitchcock's first American feature, and it garnered the Best Picture statuette at the 1941 Academy Awards. In today's films, most twists and surprises are ridiculous or just gratuitous, so it's sobering to look back on this film where every revelation not only shocks, but makes organic sense with the story line. Laurence Olivier is dashing and weak, fierce and cowed. Joan Fontaine is strong yet submissive, defiant yet accommodating. Brilliant stuff.

Hitchcock takes on Sigmund Freud in Spellbound (1945), in which psychologist Ingrid Bergman tries to solve a murder by unlocking the clues hidden in the mind of amnesiac suspect Gregory Peck. Among the highlights is a bizarre dream sequence seemingly designed by Salvador Dali--complete with huge eyeballs and pointy scissors. Spellbound is one of Hitchcock's strangest and most atmospheric films, providing the director with plenty of opportunities to explore what he called "pure cinema"--i.e., the power of pure visual associations.

Notorious (1946) features a cast to kill for: Ingrid Bergman, Cary Grant, and Claude Rains. Bergman plays the daughter of a disgraced father who is recruited by American agents to infiltrate a post-World War II spy ring in Brazil. Her control agent is Grant, who treats her with disdain while developing a deep romantic bond with her. Her assignment: to marry the suspected head of the ring (Rains) and get the goods on everyone involved. Danger, deceit, betrayal--and, yes, romance--all come together in a nearly perfect blend as the film builds to a terrific (and surprising) climax. Grant and Bergman rarely have been better.

The Man Who Knew Too Much [Blu-ray]