Viva Pedro: The Almodovar Collection (Talk to Her/ Bad Education/ All about My Mother/ Women on the Verge of a Nervous Breakdown/ Live Flesh/ Flower of My Secret / Matador / Law of Desire) 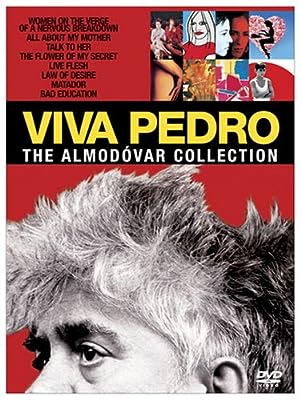 Price: $117.95
As of 2021-10-22 13:36:06 UTC (more info)
Product prices and availability are accurate as of 2021-10-22 13:36:06 UTC and are subject to change. Any price and availability information displayed on http://www.amazon.com/ at the time of purchase will apply to the purchase of this product.
Availability: Not Available - stock arriving soon
Buy Now from Amazon
Product Information (more info)
CERTAIN CONTENT THAT APPEARS ON THIS SITE COMES FROM AMAZON SERVICES LLC. THIS CONTENT IS PROVIDED 'AS IS' AND IS SUBJECT TO CHANGE OR REMOVAL AT ANY TIME.

Women on the Verge of a Nervous Breakdown Pedro Almodovar broke into the art-house mainstream with this wild, manic comedy about a gaggle of women and their various problems with men, be they married lovers, cheating husbands, fiancés, or terrorists. Almodovar's long-time leading lady, Carmen Maura, stars as an actress (famed for her laundry detergent commercial as the mother of a sloppy serial killer) who's just been dumped by her married lover. In the midst of trying to track him down for a face-to-face confrontation, she crosses paths with her lover's son (Antonio Banderas), his unbalanced wife (Julieta Serrano), and his new girlfriend (Kiti Manver). Adding more fuel to the fire is the hapless friend (Maria Barranco) who got involved with a Shiite terrorist and is now being hunted by the police. Almodovar, a master of farcical screwball comedy, manages to keep all these balls in the air in dizzy, hilarious style without once losing his momentum. Chock full of the director's over-the-top stylization, in terms of both story and sets, the film is a hilarious yet heartfelt marriage of kitsch and drama, verging on parody but never going entirely over the top. Maura is absolutely breathtaking as the unhinged lover, dispensing wise advice to others while trying to keep a semblance of sanity, and the supporting cast is quintessential Almodovar, including a brief but memorable turn by Banderas in what could have been a bland, go-nowhere role. Nominated for the Best Foreign Language Film Oscar in 1989. --Mark Englehart

All About My Mother After her son is killed in an accident, Manuela (Cecilia Roth) leaves Madrid for her old haunts in Barcelona. She reconnects with an old friend, a pre-op transsexual prostitute named La Agrado (Antonia San Juan), who introduces her to Rosa (Penélope Cruz), a young nun who turns out to be pregnant. Meanwhile, Manuela becomes a personal assistant for Huma Rojo (Marisa Paredes), an actress currently playing Blanche DuBois in a production of A Streetcar Named Desire. All About My Mother traces the delicate web of friendship and loss that binds these women together. The movie is dedicated to the actresses of the world, so it's not surprising that all the performances are superb. Roth in particular anchors All About My Mother with compassion and generosity. But fans of writer-director Pedro Almodóvar needn't fret--as always, Almodóvar's work undermines conventional notions of sexual identity and embraces all human possibilities with bright colors and melodramatic plotting. However, All About My Mother approaches its twists and turns with a broader emotional scope than most of Almodóvar's work; even the more extravagant aspects of the story are presented quietly, to allow the sadness of life to be as present as the irrepressible vitality of the characters. Almodóvar embraces pettiness, jealousy, and grief as much as kindness, courage, and outrageousness, and the movie is the richer for it. ----Bret Fetzer

Talk to Her
Writer-director Pedro Almodóvar makes another masterpiece with Talk to Her, his first film since the wonderful All About My Mother. Marco (Dario Grandinetti) is in love with Lydia (Rosario Flores), a female bullfighter who is gored by a bull and sent into a coma. In the hospital, Marco crosses paths with Benigno (Javier Camara), a male nurse who looks after another coma patient, a young dancer named Alicia (Leonor Watling). From Benigno's gentle attentiveness to Alicia, Marco learns to take care of Lydia... but from there, the story goes in directions that deftly manage to be sad, hopeful, funny, and creepy, sometimes at the same time. The rich human empathy of Almodóvar's recent films is passionate, heartbreaking, intoxicating--there aren't enough adjectives to praise this remarkable filmmaker, who is at the height of his powers. Talk to Her is superb, with outstanding performances from all involved. --Bret Fetzer

The Flower of My Secret
Pedro Alomodóvar made this misfired, rambling comedy about a romance novelist (Marisa Paredes) whose crumbling marriage has left her depressed and unable to work. At a low point, she writes a scathing indictment of her own books (which are penned under another name), with no one realizing critic and author are one and the same. Almodóvar ( Law of Desire) has the start of a great idea here, and for once, he's direct about his sympathy for a character. But nothing else about The Flower of My Secret is so clear. Despite its unusual allegiance to the straightforward "women's films" of the 1950s, this movie blows it by becoming needlessly complicated over extraneous junk, forcing one to grope in the dark for Almodóvar's point. -- Tom Keogh

Bad Education
Writer/director Pedro Almodóvar's dark, sexy Hitchcock homage is his best work since his Oscar-winning All About My Mother, and deepened by a sun-dappled sadness. Handsome, enigmatic Ángel (Gael García Bernal) arrives at the Spanish movie offices of director Enrique Goded (Fele Martinez) and happily proclaims that he's actually Enrique's long-lost school chum Ignacio--an announcement that is both less than convincing and more than it seems. A novice actor, Ángel pitches a semi-autobiographical screenplay in which he's determined to star, a revenge-laden reflection of the doomed love he and Enrique shared as boys before a pedophile priest cruelly intervened. The script, and the lost days it recalls, carefully unfurls into a series of brooding movies-within-movies and memories-inside-memories, which allow the sensual, multiple-role-playing Bernal to give the performance of his young career--among other things, he makes a stunningly convincing drag queen--and Almodóvar the opportunity to movingly suggest that people will pay any price to ensure that their stories are told. -- Steve Wiecking

Videodrome (The Criterion Collection) [B...