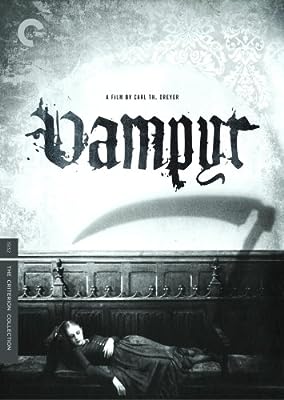 Price:
As of 2021-10-23 02:16:18 UTC (more info)
Product prices and availability are accurate as of 2021-10-23 02:16:18 UTC and are subject to change. Any price and availability information displayed on http://www.amazon.com/ at the time of purchase will apply to the purchase of this product.
Availability: Not Available - stock arriving soon
Buy Now from Amazon
Product Information (more info)
CERTAIN CONTENT THAT APPEARS ON THIS SITE COMES FROM AMAZON SERVICES LLC. THIS CONTENT IS PROVIDED 'AS IS' AND IS SUBJECT TO CHANGE OR REMOVAL AT ANY TIME.

In this chilling, atmospheric film from 1932, Danish director Carl Theodor Dreyer favors style over story, offering a minimal plot that draws only partially from established vampire folklore. Instead, Dreyer emphasizes an utterly dreamlike visual approach, using trick photography (double exposures, etc.) and a fog-like effect created by allowing additional light to leak onto the exposed film. The result is an unsettling film that seems to spring literally from the subconscious, freely adapted from the Victorian short story Carmilla by noted horror author Joseph Sheridan Le Fanu, about a young man who discovers the presence of a female vampire in a mysterious European castle. There's more to the story, of course, but it's the ghostly, otherworldly tone of the film that lingers powerfully in the memory. Dreyer maintains this eerie mood by suggesting horror and impending doom as opposed to any overt displays of terrifying imagery. Watching Vampyr is like being placed under a hypnotic trance, where the rules of everyday reality no longer apply. As a splendid bonus, the DVD includes The Mascot, a delightful 26-minute animated film from 1934. Created by pioneering animator Wladyslaw Starewicz, this clever film--in which a menagerie of toys and dolls springs to life--serves as an impressive precursor to the popular Wallace & Gromit films of the 1990s. --Jeff Shannon