Uncle Boonmee Who Can Recall His Past Lives [Blu-ray] 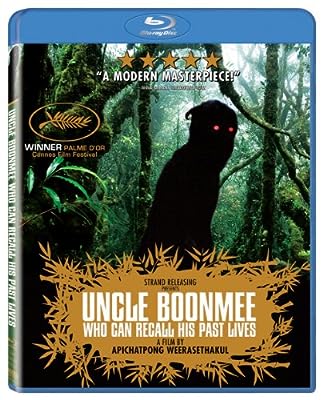 Price: $22.99
As of 2023-02-04 23:13:09 UTC (more info)
Product prices and availability are accurate as of 2023-02-04 23:13:09 UTC and are subject to change. Any price and availability information displayed on http://www.amazon.com/ at the time of purchase will apply to the purchase of this product.
Availability: Not Available - stock arriving soon
Buy Now from Amazon
Product Information (more info)
CERTAIN CONTENT THAT APPEARS ON THIS SITE COMES FROM AMAZON SERVICES LLC. THIS CONTENT IS PROVIDED 'AS IS' AND IS SUBJECT TO CHANGE OR REMOVAL AT ANY TIME.

Winner of the top prize at the Cannes Film Festival, Uncle Boonmee Who Can Recall His Past Lives is a unique tale of a man embracing life's greatest mystery. Choosing to spend his final days surrounded by his loved ones in the countryside, Boonmee is visited by his dead wife (a ghost) and his lost son (an strange hairy beast with red glowing eyes) who come to guide him to his final resting place, a cave where his first soul began. With a wry sense of humor and a humanist spirit, Uncle Boonmee, one of the most critically acclaimed films of the year, is a magical tale of reincarnation, karma and nature.

In Thai with English Subtitles