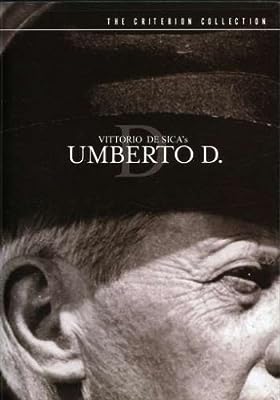 Price: $18.01
As of 2022-08-18 04:43:00 UTC (more info)
Product prices and availability are accurate as of 2022-08-18 04:43:00 UTC and are subject to change. Any price and availability information displayed on http://www.amazon.com/ at the time of purchase will apply to the purchase of this product.
Availability: Not Available - stock arriving soon
Buy Now from Amazon
Product Information (more info)
CERTAIN CONTENT THAT APPEARS ON THIS SITE COMES FROM AMAZON SERVICES LLC. THIS CONTENT IS PROVIDED 'AS IS' AND IS SUBJECT TO CHANGE OR REMOVAL AT ANY TIME.

Shot on location with a cast of nonprofessional actors, Vittorio De Sica’s neorealist masterpiece follows Umberto D., an elderly pensioner, as he struggles to make ends meet during Italy’s postwar economic boom. Alone except for his dog, Flike, Umberto strives to maintain his dignity while trying to survive in a city where traditional human kindness seems to have lost out to the forces of modernization. Umberto’s simple quest to fulfill the most fundamental human needs—food, shelter, companionship—is one of the most heartbreaking stories ever filmed and an essential classic of world cinema.

Umberto D. is one of the enduring masterpieces of Italian neorealism, considered by many to be one of the greatest films ever made. Everything that neorealism represents can be found in this simple, heartbreaking story of an aged Roman named Umberto (played by Carlo Battisti, non-professional actor and retired college professor) who struggles to survive in a city plagued by passive disregard for the post-World War II plight of the elderly. With his little dog, Flike, as his only companion, Umberto faces imminent eviction, and his insufficient pension and failed attempts to raise money lead him to contemplate suicide... if he can find a home for Flike. His dilemma--and director Vittorio De Sica's compassionate, unsentimental handling of it--results in a film of uncompromising grace and authenticity. Like De Sica's earlier masterpieces Shoeshine and The Bicycle Thief, Umberto D. earns its teardrops honestly; if this timeless classic doesn't make you smile and cry, you'd better check for a pulse. --Jeff Shannon