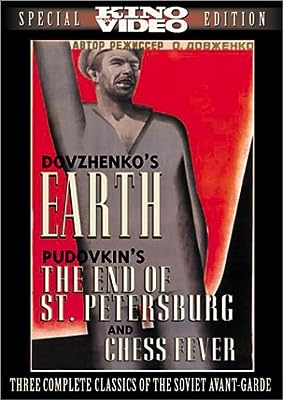 Price: $29.98
As of 2022-10-05 06:58:06 UTC (more info)
Product prices and availability are accurate as of 2022-10-05 06:58:06 UTC and are subject to change. Any price and availability information displayed on http://www.amazon.com/ at the time of purchase will apply to the purchase of this product.
Availability: Not Available - stock arriving soon
Buy Now from Amazon
Product Information (more info)
CERTAIN CONTENT THAT APPEARS ON THIS SITE COMES FROM AMAZON SERVICES LLC. THIS CONTENT IS PROVIDED 'AS IS' AND IS SUBJECT TO CHANGE OR REMOVAL AT ANY TIME.

One of the undisputed masterpieces of the cinema, no single viewing of Earth will ever reveal all of its poetic brilliance. The third in a triptych of films by Ukrainian director Alexander Dovzheko (after Zvenigora in 1927 and Arsenal in 1928), Earth is strikingly simple in plot. On the eve of collectivization in the Ukraine, an old farmer dies peacefully in bed. His grandson Vasil has a new vision: the village council will buy a tractor to be shared among the farmers. Struggling against the superstition, rich landowners and nature itself, Vasil is ultimately the victim of a tragic murder, but the dawn brings forth a new life and the promise of prosperity to the poor village. The story itself is secondary to the beautifully stunning images that Dovzhenko creates. His love for the Ukrainian people and land intoxicates the viewer with the sensual splendors that fill the screen. Assigned to make a film commemorating the 10th anniversary of the 1917 Revolution, Vsevolod Pudovkin crafted an intensely dramatic and personal dramatization of those earth-shaking events. The End of St. Petersburg opens on a farm where a peasant must stay in the field and plow as his wife dies in childbirth. Trudging to the city to seek work, he is forced into scab labor. He tragically realizes the consequences of his mistake and violently attacks his employer. After jail, he is forced to join the army. World War I, in the best depiction yet of the horrors of battle, destroys all in its path as the bourgeois speculators grow rich. But the revolution frees St. Petersburg from the brutal yoke of the rich and there is born a new hope for the future. The New York Times remarked that "one feels sometimes as though this film were a remarkable newsreel of the Russian Revolution." Also featured on this DVD is Chess Fever a Keaton-esque comedy in which a young man's passion for the game threatens to wreck his marriage.