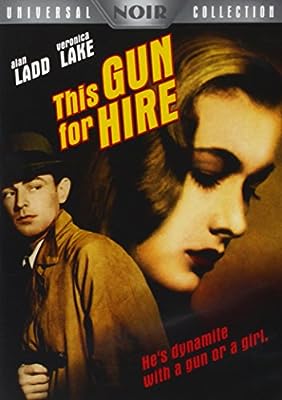 Price: $9.99
As of 2023-02-05 09:26:10 UTC (more info)
Product prices and availability are accurate as of 2023-02-05 09:26:10 UTC and are subject to change. Any price and availability information displayed on http://www.amazon.com/ at the time of purchase will apply to the purchase of this product.
Availability: Not Available - stock arriving soon
Buy Now from Amazon
Product Information (more info)
CERTAIN CONTENT THAT APPEARS ON THIS SITE COMES FROM AMAZON SERVICES LLC. THIS CONTENT IS PROVIDED 'AS IS' AND IS SUBJECT TO CHANGE OR REMOVAL AT ANY TIME.

One of Hollywood's classic hard-boiled thrillers and a favorite of suspense film lovers. The picture marked the first hit pairing of tough guy Alan Ladd, in the role that made him an instant star, and sultry blonde bombshell Veronica Lake. Adapted from a novel by Graham Greene, it's the hard-edged story of love, power and betrayal set in the seamy underworld of the 1940's. Raven (Alan Ladd) is a cold-blooded professional killer who's been double-crossed by his client. Ellen (Veronica Lake) is a beautiful nightclub singer who's spying on her corrupt boss. Lt. Michael Crane (Robert Preston) is a dedicated cop who wants Ellen's love and Raven's capture. The tension mounts and before the case is wrapped up, someone will pay with his life.