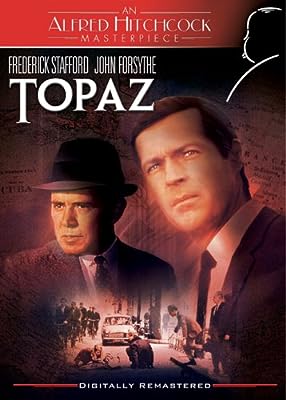 Price: $19.98
As of 2023-02-04 14:02:09 UTC (more info)
Product prices and availability are accurate as of 2023-02-04 14:02:09 UTC and are subject to change. Any price and availability information displayed on http://www.amazon.com/ at the time of purchase will apply to the purchase of this product.
Availability: Not Available - stock arriving soon
Buy Now from Amazon
Product Information (more info)
CERTAIN CONTENT THAT APPEARS ON THIS SITE COMES FROM AMAZON SERVICES LLC. THIS CONTENT IS PROVIDED 'AS IS' AND IS SUBJECT TO CHANGE OR REMOVAL AT ANY TIME.

The best-selling spy novel bursts onto the screen in this riveting story of adventure and international intrigue. John Forsythe stars as an American CIA agent who hires a French operative (Frederick Stafford) to travel to Cuba and investigate rumors of Russian missiles and Topaz, a NATO spy. The inquiry soon spins into a life-threatening escapade of espionage, betrayal and murder.