The Woody Allen Collection, Set 1 (Annie Hall/Manhattan/Sleeper/Bananas/Interiors/Stardust Memories/Love and Death/Everything You Always Wanted to Know About Sex But Were Afraid to Ask) 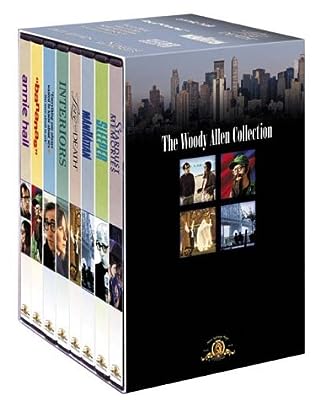 Price: $64.99
As of 2022-08-11 03:06:35 UTC (more info)
Product prices and availability are accurate as of 2022-08-11 03:06:35 UTC and are subject to change. Any price and availability information displayed on http://www.amazon.com/ at the time of purchase will apply to the purchase of this product.
Availability: Not Available - stock arriving soon
Buy Now from Amazon
Product Information (more info)
CERTAIN CONTENT THAT APPEARS ON THIS SITE COMES FROM AMAZON SERVICES LLC. THIS CONTENT IS PROVIDED 'AS IS' AND IS SUBJECT TO CHANGE OR REMOVAL AT ANY TIME.

Starting with 1971's Bananas, Woody Allen's second film as director, this set of eight movies includes all of Allen's work as a director up to 1980, when he wrestled with his own popularity in the Fellini-esque Stardust Memories, showcasing the distinctive arc of a filmmaker who moved from lighthearted movies to more serious fare that still remains breathtaking after 20 years. In between those two movies, there are wonderful trips of comedy, tragedy and romance to be had. Everything You Always Wanted to Know About Sex but Were Afraid to Ask is a hilarious set of vignettes based on the popular instructional manual, the most notable a segment featuring Gene Wilder's infatuation with a female sheep. The futuristic Sleeper and the underrated Love and Death showcase Allen at his funniest, especially the latter, which tackles the weighty subjects of Russian novels and Bergman films with adroit parody.

Allen's Oscar-winning Annie Hall is one of the most joyous (and melancholy) romances ever made, with a star-making turn by Diane Keaton and a witty screenplay (cowritten with Marshall Brickman) that remains one of Allen's best. Allen did a 180 with the Bergman-esque Interiors, a sometimes stilted drama that nonetheless presaged the dysfunctional-family drama of films like Ordinary People and featured outstanding performances by Geraldine Page and Mary Beth Hurt, as well as unparalleled cinematography by Gordon Willis. The last two films in the set--the romantic Manhattan and the acidic Stardust Memories--are both gorgeously shot in black and white and represent Allen at the peak of his creative powers, as he wrestles with the meaning of life in terms of both love and art, albeit from different perspectives. Indispensable to any film fan, this boxed set represents nothing less than a landmark of American cinema. --Mark Englehart