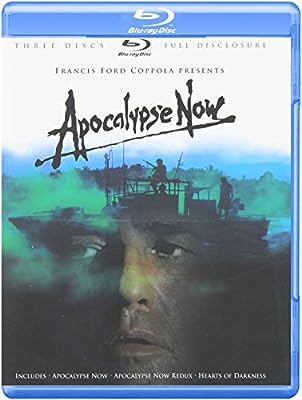 Price: $39.99
As of 2022-10-04 01:05:27 UTC (more info)
Product prices and availability are accurate as of 2022-10-04 01:05:27 UTC and are subject to change. Any price and availability information displayed on http://www.amazon.com/ at the time of purchase will apply to the purchase of this product.
Availability: Not Available - stock arriving soon
Buy Now from Amazon
Product Information (more info)
CERTAIN CONTENT THAT APPEARS ON THIS SITE COMES FROM AMAZON SERVICES LLC. THIS CONTENT IS PROVIDED 'AS IS' AND IS SUBJECT TO CHANGE OR REMOVAL AT ANY TIME.

Additional features include a 48-page collectible booklet with never-before-seen archives from the set, over 9 hours of bonus features, plus a storyboard gallery, image galleries, marketing archives and an original script excerpt from John Milius featuring hand-written notes from Coppola.

Apocalypse Now / Apocalypse Now: Redux
In the tradition of such obsessively driven directors as Erich von Stroheim and Werner Herzog, Francis Ford Coppola approached the production of Apocalypse Now as if it were his own epic mission into the heart of darkness. On location in the storm-ravaged Philippines, he quite literally went mad as the project threatened to devour him in a vortex of creative despair, but from this insanity came one of the greatest films ever made. It began as a John Milius screenplay, transposing Joseph Conrad's classic story "Heart of Darkness" into the horrors of the Vietnam War, following a battle-weary Captain Willard (Martin Sheen) on a secret upriver mission to find and execute the renegade Colonel Kurtz (Marlon Brando), who has reverted to a state of murderous and mystical insanity. The journey is fraught with danger involving wartime action on epic and intimate scales. One measure of the film's awesome visceral impact is the number of sequences, images, and lines of dialogue that have literally burned themselves into our cinematic consciousness, from the Wagnerian strike of helicopter gunships on a Vietnamese village to the brutal murder of stowaways on a peasant sampan and the unflinching fearlessness of the surfing warrior Lieutenant Colonel Kilgore (Robert Duvall), who speaks lovingly of "the smell of napalm in the morning." Like Herzog's Aguirre: The Wrath of God, this film is the product of genius cast into a pit of hell and emerging, phoenix-like, in triumph. Coppola's obsession (effectively detailed in the riveting documentary Hearts of Darkness, directed by Coppola's wife, Eleanor) informs every scene and every frame, and the result is a film for the ages. --Jeff Shannon

Hearts of Darkness
Hearts of Darkness is an engrossing, unwavering look back at Francis Coppola's chaotic, catastrophe-plagued Vietnam production, Apocalypse Now. Filled with juicy gossip and a wonderful behind-the-scenes look at the stressful world of moviemaking, the documentary mixes on-location home movies shot in the Philippines by Eleanor Coppola, the director's wife, with revealing interviews with the cast and crew, shot 10 years later. Similar to Burden of Dreams, Les Blank's absorbing portrait of Werner Herzog's struggle to make Fitzcarraldo, the film chronicles Coppola's eventual decent into obsessive psychosis as everything that could go wrong does go wrong. Storms destroy sets, money evaporates, the Philippine government continually harasses the director, Coppola has romantic affairs, and he can't write the story's ending. Everything is captured on film. In the most disturbing scene, we watch Martin Sheen have a drunken nervous breakdown while his director goads him on (he eventually suffered a heart attack, but finished the film).

Other incredible footage is not visual, but aural as the film includes tapes Eleanor Coppola recorded without Francis's knowledge. In them, he truly sounds like a madman as he confesses his fears about making a bomb of a movie. But while Hearts of Darkness is an amazing, voyeuristic experience, its importance lies in the personal reflections offered by those involved. Sheen, Coppola, and Dennis Hopper speak frankly without embarrassment, offering us an essential piece of film history. --Dave McCoy