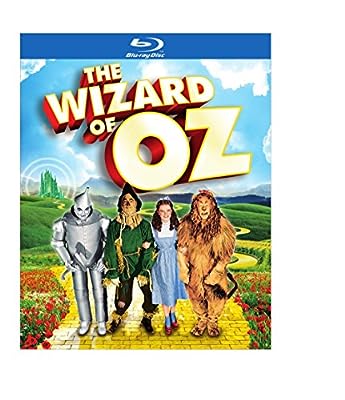 Price: $8.43
As of 2022-08-13 07:25:16 UTC (more info)
Product prices and availability are accurate as of 2022-08-13 07:25:16 UTC and are subject to change. Any price and availability information displayed on http://www.amazon.com/ at the time of purchase will apply to the purchase of this product.
Availability: Not Available - stock arriving soon
Buy Now from Amazon
Product Information (more info)
CERTAIN CONTENT THAT APPEARS ON THIS SITE COMES FROM AMAZON SERVICES LLC. THIS CONTENT IS PROVIDED 'AS IS' AND IS SUBJECT TO CHANGE OR REMOVAL AT ANY TIME.

The magic of M-G-M’s wonderfully colorful and unique fantasy has melted hearts for more than seven decades with its indelible melodies and transcendent themes of family, home and the courage to pursue dreams. To celebrate the beloved movie’s 75th anniversary, Warner Bros. Home Entertainment is re-releasing The Wizard of Oz on Blu-ray.

Adapted from L. Frank Baum’s timeless children’s tale about a Kansas girl’s journey over the rainbow, The Wizard of Oz starred Judy Garland as Dorothy, Ray Bolger as the Scarecrow; Bert Lahr as the Cowardly Lion; Jack Haley as the Tin Woodman and Margaret Hamilton as the Wicked Witch.