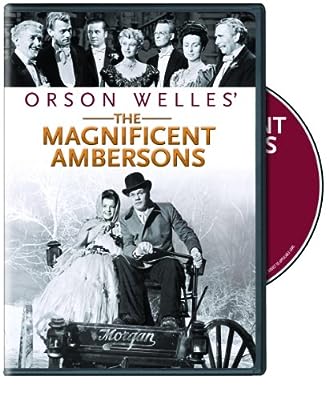 Price: $14.96
As of 2022-10-04 06:32:37 UTC (more info)
Product prices and availability are accurate as of 2022-10-04 06:32:37 UTC and are subject to change. Any price and availability information displayed on http://www.amazon.com/ at the time of purchase will apply to the purchase of this product.
Availability: Not Available - stock arriving soon
Buy Now from Amazon
Product Information (more info)
CERTAIN CONTENT THAT APPEARS ON THIS SITE COMES FROM AMAZON SERVICES LLC. THIS CONTENT IS PROVIDED 'AS IS' AND IS SUBJECT TO CHANGE OR REMOVAL AT ANY TIME.

A spat between wealthy, young Isabel Amberson and her beau, the brash inventor, Eugene Morgan, launches a chain of events that will haunt two families for generations in Orson Welles classic The Magnificent Ambersons. After quarreling with Eugene (Joseph Cotton), Isabel (Dolores Costello) marries a man she does not love and devotes her life to her son, George (Tim Holt). Over the years, Eugene becomes a millionaire in the new automobile industry; George grows into an insufferable young man; and Eugene and Isabel, both widowed, resume their relationship. Eugene proposes to Isabel, but George, who has never had to work, disdains the self-made Eugene. He bars his mother from seeing the one man she has ever loved. Yet, even though George has prevented Eugene from ever marrying Isabel, Eugene rescues George when tragedy strikes the Amberson family.