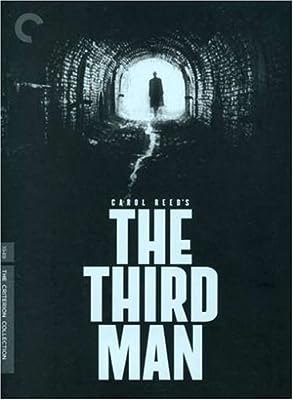 Price: $39.95
As of 2022-10-04 09:35:46 UTC (more info)
Product prices and availability are accurate as of 2022-10-04 09:35:46 UTC and are subject to change. Any price and availability information displayed on http://www.amazon.com/ at the time of purchase will apply to the purchase of this product.
Availability: Not Available - stock arriving soon
Buy Now from Amazon
Product Information (more info)
CERTAIN CONTENT THAT APPEARS ON THIS SITE COMES FROM AMAZON SERVICES LLC. THIS CONTENT IS PROVIDED 'AS IS' AND IS SUBJECT TO CHANGE OR REMOVAL AT ANY TIME.

Cynical pulp novelist Holly Martins arrives in shadowy Vienna to investigate the mysterious death of his old friend, black-market opportunist Harry Lime, and thus begins an ever-thickening web of love, deception, and murder that adds up to one of cinema’s most immortal treats, as well as one of its trickiest. Thanks to brilliant performances by Joseph Cotten, Alida Valli, and Orson Welles; Anton Karas’s timeless, evocative zither score; Graham Greene’s razor-sharp dialogue; and Robert Krasker’s haunting deep focus shots, off-kilter angles, and dramatic use of light and shadow, The Third Man, directed by the inimitable Carol Reed, only grows in stature as the years pass.

There have been few better movies in the history of the planet than The Third Man, and fewer still as brilliantly directed from second to second. Orson Welles played the title role, and his legend has tended to engulf the film. But it was directed by Carol Reed and written--except for a Wellesian riff on the Borgias--by Graham Greene, and the credit for this masterpiece is properly theirs. Theirs and Joseph Cotten's; for awesome as Welles is, his Citizen Kane second banana is onscreen about six times as much, and Cotten uses every minute to create one of the most distinctive--if also forlorn--of modern heroes.

You know the story. Holly Martins (Cotten), a writer of pulp Westerns and one of life's congenital third-raters, arrives in post-WWII Vienna only to learn that his old pal Harry Lime, the guy who sent him his plane ticket, is being buried. Everybody, from a cynical British cop named Calloway (Trevor Howard) to Harry's Continental knockout of a girlfriend (AlidaValli) and his sundry absurd/Euro-sinister business associates, feels that Holly should get on another plane and go home. He doesn't. Things come to light. Other deaths follow. The world lies in utter ruin.

The Third Man completed a sublime hat trick--an international critical and popular smash following upon the success of Reed's Odd Man Out ('47) and The Fallen Idol ('48). Although other filmmakers had begun to use war-ravaged Europe as a great movie set, The Third Man is so vivid in its canny mix of gray semidocumentary and insanely angular, Expressionist/Surrealist chiaroscuro that it seems to have imagined not only the postwar thriller but also postwar Europe itself singlehandedly.

What great movie moments: The throwaway details like a mourner who forgets to drop his wreath on a newly dug grave. The sly editing whereby thick-headed Sergeant Paine (Bernard Lee, once and future "M" to 007) goes on leafing through a magazine, knowing just the moment he must rise and subdue the nervy Yank who would take a punch at his boss. The way Anton Karas's legendary zither score seems to jangle in the very guy-lines of a bridge where, far below Robert Krasker's Oscar-winning camera, the Third Man calls a war council. The shadow of a dead man towering, big as Europe, over the nighttime streets of Vienna. --Richard T. Jameson

Stills from The Third Man (Click for larger image)

The Fallen Idol (The Criterion Collectio...