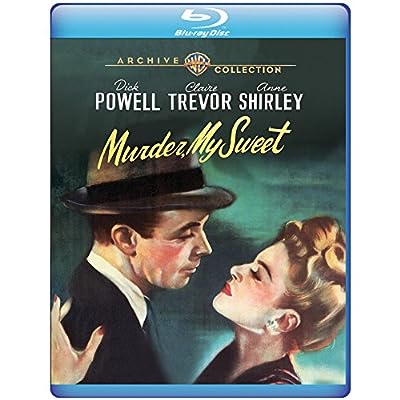 Price: $21.99
As of 2022-10-04 12:13:40 UTC (more info)
Product prices and availability are accurate as of 2022-10-04 12:13:40 UTC and are subject to change. Any price and availability information displayed on http://www.amazon.com/ at the time of purchase will apply to the purchase of this product.
Availability: Not Available - stock arriving soon
Buy Now from Amazon
Product Information (more info)
CERTAIN CONTENT THAT APPEARS ON THIS SITE COMES FROM AMAZON SERVICES LLC. THIS CONTENT IS PROVIDED 'AS IS' AND IS SUBJECT TO CHANGE OR REMOVAL AT ANY TIME.

Dick Powell stars as Raymond Chandler's hard-bitten, world-weary private detective, Philip Marlowe, in this classic film noir adaptation of Chandler's novel "Farewell, My Lovely". Marlowe takes a job looking for Moose Malloy's (Mike Mazurki) girlfriend Velma. Malloy's a petty criminal just released after a seven-year prison sentence, and Velma has not been seen for six years. But a simple missing-person case becomes much more twisted than Marlowe ever anticipated as initially promising clues lead to a complex web of deceit, bribery, perjury and theft, in which no one's motivation is clear ... least of all Marlowe's.