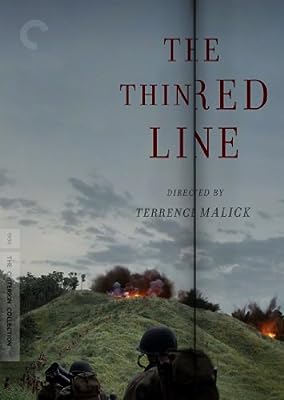 Price: $22.99
As of 2023-02-01 14:42:30 UTC (more info)
Product prices and availability are accurate as of 2023-02-01 14:42:30 UTC and are subject to change. Any price and availability information displayed on http://www.amazon.com/ at the time of purchase will apply to the purchase of this product.
Availability: Not Available - stock arriving soon
Buy Now from Amazon
Product Information (more info)
CERTAIN CONTENT THAT APPEARS ON THIS SITE COMES FROM AMAZON SERVICES LLC. THIS CONTENT IS PROVIDED 'AS IS' AND IS SUBJECT TO CHANGE OR REMOVAL AT ANY TIME.

After directing two of the most extraordinary movies of the 1970s, Badlands and Days of Heaven, American artist Terrence Malick disappeared from the film world for twenty years, only to resurface in 1998 with this visionary adaptation of James Jones’s 1962 novel about the World War II battle for Guadalcanal. A big-budget, spectacularly mounted epic, THE THIN RED LINE is also one of the most deeply philosophical films ever released by a major Hollywood studio, a thought-provoking meditation on man, nature, and violence. Featuring a cast of contemporary cinema’s finest actors—Sean Penn (Dead Man Walking, Milk), Nick Nolte (The Prince of Tides, Affliction), Elias Koteas (Zodiac, The Curious Case of Benjamin Button), and Woody Harrelson (Natural Born Killers, The People vs. Larry Flynt) among them—THE THIN RED LINE is a kaleidoscopic evocation of the experience of combat that ranks as one of cinema’s greatest war films.

The Threepenny Opera (The Criterion Coll...