The Spirit of the Beehive (Criterion Collection) 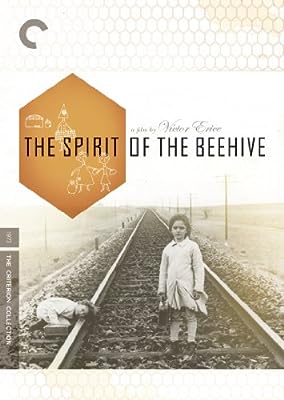 Price: $29.95
Availability: Not Available - stock arriving soon
Buy Now from Amazon
Product Information (more info)
CERTAIN CONTENT THAT APPEARS ON THIS SITE COMES FROM AMAZON SERVICES LLC. THIS CONTENT IS PROVIDED 'AS IS' AND IS SUBJECT TO CHANGE OR REMOVAL AT ANY TIME.

The film opens in the year 1940 in a small isolated Spanish village on the Castilian plateau, as a ramshackle truck arrives as the village's children scamper around it shouting, "The movies coming! The movies coming!" A screen and projector are set up within the public hall, as children and adults gather together to see the James Whale horror classic Frankenstein. When the monster appears on the screen he has an astounding emotional effect on the children, especially the iconic scene in which the monster comes upon and accidentally drowns a farmer's daughter. One child's misunderstanding of this scene will shape the upcoming events in Victor Erice's The Spirit of the Beehive, which is considered by many to be one of the greatest Spanish films of all time. The Spirit of the Beehive gorgeously blends the elements of the fantasy and horror and places them within the eyes of a innocent adolescent; exploring on how these fantastical elements can clash with the harsh truths of war and reality.

The Criterion Collection is proud to present Victor Erice's THE SPIRIT OF THE BEEHIVE (El espiritu de la colmena), widely regarded as the greatest Spanish film of the 1970s. In a small Castilian village in 1940, directly following the country's devastating civil war, six-year-old Ana attends a traveling movie show of Frankenstein and becomes haunted by her memory of it. Produced by one of cinema's most mysterious auteurs as Franco's long regime was nearing its end, THE SPIRIT OF THE BEEHIVE is both a bewitching portrait of a child's inner life and an elusive, cloaked meditation on a nation trapped under tyranny.

When The Spirit of the Beehive was first released in 1973 it was immediately controversial because of its political metaphors, and when the film won the San Sebastian Award, it was attacked by leftist critics who booed the film with some even stomping their feet with protest. The film was considered by many a critical portrayal of the fascist regime which was under the forty-year dictatorship of General Francisco Franco who came to power in Spain in 1939, after a bloody civil war that overthrew a leftist government. The Spirit of the Beehive is looked at as a classic example of 'Francoism aesthetics' which was an artistic expression towards leftist experimental movies at the time that usually used the themes of fantasy and allegory. Similar to Luis Bunuel's masterpiece Viridiana, Francoism was used as a function to raise the standard of Spanish cinema, and to change the negative image of Spanish films abroad creating a new found artistic and subtle impression that freedom of expression was permitted within the cinema.