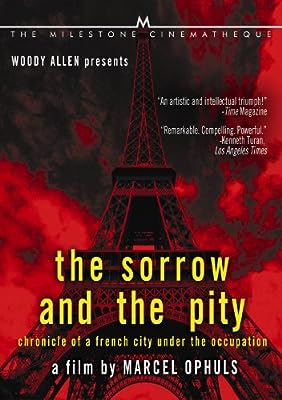 Price: $34.99
As of 2022-11-27 19:30:03 UTC (more info)
Product prices and availability are accurate as of 2022-11-27 19:30:03 UTC and are subject to change. Any price and availability information displayed on http://www.amazon.com/ at the time of purchase will apply to the purchase of this product.
Availability: Not Available - stock arriving soon
Buy Now from Amazon
Product Information (more info)
CERTAIN CONTENT THAT APPEARS ON THIS SITE COMES FROM AMAZON SERVICES LLC. THIS CONTENT IS PROVIDED 'AS IS' AND IS SUBJECT TO CHANGE OR REMOVAL AT ANY TIME.

A chronicle of a French city under the occupation. Director Marcel Ophuls combined interviews and archival film footage to explore the reality of the French occupation in one small industrial city, Clermont-Ferrand. He spoke with resistance fighters, collaborators, spies, farmers, government officials, writers, artists and veterans. The result is a shattering portrait of how ordinary people actually conducted themselves under extraordinary circumstances. By turns gripping, horrifying, and inspiring, Academy Award nominee The Sorrow and the Pity is a triumph of humanist filmmaking and a testament to the power of cinema. Before Shoah, Schindler's List, The Long Way Home, and The Last Days, there was The Sorrow and the Pity.