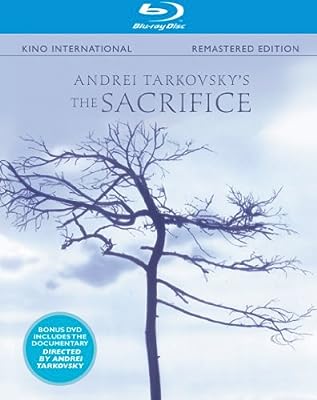 Price: $24.49
As of 2021-10-23 21:42:12 UTC (more info)
Product prices and availability are accurate as of 2021-10-23 21:42:12 UTC and are subject to change. Any price and availability information displayed on http://www.amazon.com/ at the time of purchase will apply to the purchase of this product.
Availability: Not Available - stock arriving soon
Buy Now from Amazon
Product Information (more info)
CERTAIN CONTENT THAT APPEARS ON THIS SITE COMES FROM AMAZON SERVICES LLC. THIS CONTENT IS PROVIDED 'AS IS' AND IS SUBJECT TO CHANGE OR REMOVAL AT ANY TIME.

In The Sacrifice, Alexander's (Erland Josephson) birthday party is interrupted by news that World War III has begun and mankind is hours away from annihilation. To avoid war, Alexander promises to God that he'll sacrifice all he has -- even his son. This new remastered edition of Tarkovsky's final film features a new, much improved transfer of the film in anamorphic widescreen and the first time on Blu-ray! Special features include the feature length documentary 'Directed by Andrei Tarkovsky', a behind the scenes look at one of the most influential directors of our time, photo gallery, trailers and more! (NOTE: This two disc set features the movie on Blu-ray and the second disc with the special features is a DVD)