Rules of the Game (The Criterion Collection) [Blu-ray] 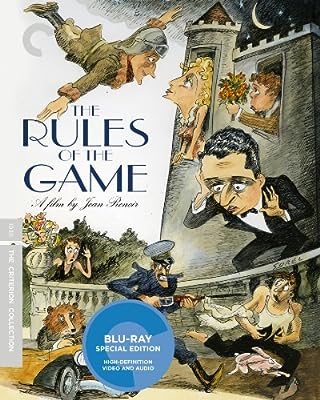 Price: $24.02
As of 2021-10-23 22:37:37 UTC (more info)
Product prices and availability are accurate as of 2021-10-23 22:37:37 UTC and are subject to change. Any price and availability information displayed on http://www.amazon.com/ at the time of purchase will apply to the purchase of this product.
Availability: Not Available - stock arriving soon
Buy Now from Amazon
Product Information (more info)
CERTAIN CONTENT THAT APPEARS ON THIS SITE COMES FROM AMAZON SERVICES LLC. THIS CONTENT IS PROVIDED 'AS IS' AND IS SUBJECT TO CHANGE OR REMOVAL AT ANY TIME.

The great French director Jean Renoir anticipated for war and troubled by it, he created a remarkable comedy of manners, an absurd comic farce that ends in tragedy. A total box-office failure in 1939, Jean Renoirs The Rules of the Game is now considered not only one of the greatest films ever made but an amazing advancement of lighting and cinematography. The film tells a story about several lovers taking a weekend to a country estate, and Renoir remarkably constructs husbands and wives, masters and servants, and lovers and adulterers, and places them together to commit several unmoral acts with one another. Once Renoir gets his characters to all pair up, the game of love begins and the characters roam through halls and bedrooms, swapping partners and creating new quarrels, while in the meantime trying to portray to the other guests that they are a classy bourgeoisie society. In the words of Dudley Andrew, "the most complex social criticism ever enacted on the screen."

Considered one of the greatest films ever made, The Rules of the Game (La règle du jeu), by Jean Renoir (Grand Illusion), is a scathing critique of corrupt French society cloaked in a comedy of manners, in which a weekend at a marquis’s countryside chateau lays bare some ugly truths about a group of haute bourgeois acquaintances. The film was a victim of tumultuous history—it was subjected to cuts after premiere audiences rejected it in 1939, and the original negative was destroyed during World War II; it wasn’t reconstructed until 1959. That version, which has stunned viewers for decades, is presented here.

Renoir develops a groundbreaking technique with his style of cinematography as he clashes montage and editing together within several of his shots, creating a unity with space and time with the arrangement of people and objects. With several stories and events being depicted at once, Renoir creates a depth of field which creates different layers of action for the spectator to look at allowing characters to come and go in the foreground and background, sometimes disappearing in the distance and then reappearing in close-up. Unfortunately during one of the Allied bombings, the original negative of The Rules of the Game was destroyed, leading many to believe that a complete version would never be seen again. After the war, pieces of the negative were found, and the painstaking task of resembling the film was undertaken. The film was finally restored to its original running time along with Jean Renoir's approval and advice, and in the credits dedicated his resurrection to the memory of the great French film critic Andre Bazin.