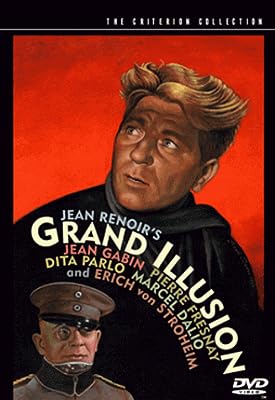 Price: $61.99
As of 2022-08-13 18:26:05 UTC (more info)
Product prices and availability are accurate as of 2022-08-13 18:26:05 UTC and are subject to change. Any price and availability information displayed on http://www.amazon.com/ at the time of purchase will apply to the purchase of this product.
Availability: Not Available - stock arriving soon
Buy Now from Amazon
Product Information (more info)
CERTAIN CONTENT THAT APPEARS ON THIS SITE COMES FROM AMAZON SERVICES LLC. THIS CONTENT IS PROVIDED 'AS IS' AND IS SUBJECT TO CHANGE OR REMOVAL AT ANY TIME.

Jean Renoir’s Grand Illusion is not only the greatest of all prison escape movies but it is regarded by critics and film historians as one of the greatest films in the world. Apart from its other extraordinary achievements Grand Illusion influenced three later movie sequences that became classics of their own. The digging of the escape tunnel in The Great Escape, the singing of the Marseilles to enrage the Germans in Casablanca, and going out to the garden to deposit the dirt from the tunnel by shaking their pants in The Shawshank Redemption. Grand Illusion earned Jean Renoir enormous acclaim in the United States, exciting the admiration of President Franklin D. Roosevelt who ran the film for 26 weeks in New York after its opening in September 1938, and it became the first foreign language film nominated for the Academy Award for Best Picture.

One of the very first prison escape movies, Grand Illusion is hailed as one of the greatest films ever made. Jean Renoir's antiwar masterpiece stars Jean Gabin and Pierre Fresnay, as French soldiers held in a World War I German prison camp, and Erich von Stroheim as the unforgettable Captain von Rauffenstein. Following a smash theatrical re-release, Criterion is proud to present Grand Illusion in a new special edition, with a beautifully restored digital transfer.

Orson Welles named Grand Illusion as one of the movies "he would take with him on the ark." It’s a war film that has no war scenes and yet it's ideas are much richer and more humane than most war films. It's not a movie about a prison escape, it's a meditation on the collapse of the old order of European civilization. It’s not a surprise at the time of it’s release in 1937 that Grand Illusion was banned in Italy by Mussolini and of course was one of the first films the Nazi’s seized when propaganda minister Joseph Goebbels considered it Cinematic Public Enemy No.1. and ordered the prints to be confiscated and destroyed. Because of it fearing negative influence on the fighting morale of the German soldiers and because of its anti-war message, it was perceived as ideological criticisms which pointed towards Germany on the eve of the Second World War. The nitrate film negative was thought to have been lost in an Allied air raid in 1942 that destroyed a leading laboratory outside Paris. Suddenly prints of the film were rediscovered and restored and was finally re-released during the early 1950s.