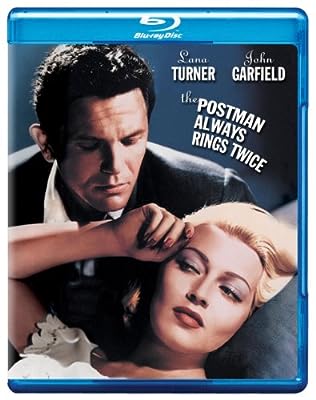 Price: $19.98
As of 2023-02-04 10:50:17 UTC (more info)
Product prices and availability are accurate as of 2023-02-04 10:50:17 UTC and are subject to change. Any price and availability information displayed on http://www.amazon.com/ at the time of purchase will apply to the purchase of this product.
Availability: Not Available - stock arriving soon
Buy Now from Amazon
Product Information (more info)
CERTAIN CONTENT THAT APPEARS ON THIS SITE COMES FROM AMAZON SERVICES LLC. THIS CONTENT IS PROVIDED 'AS IS' AND IS SUBJECT TO CHANGE OR REMOVAL AT ANY TIME.

Adapted from James M. Cain's story, the film relolves around the destructive relationship of two lovers whose troubles mount after they do away with her husband.

Lana Turner was arguably the most glamorous and popular movie star in the world for the better part of a decade, with her come-hither figure gracing World War II fighter planes and her complicated romantic exploits splashed across tabloid fanzines. Teamed with the thuggishly handsome John Garfield--a pretty big box-office draw himself--she made this 1946 adaptation of James M. Cain's pulp potboiler one of the steamiest films noir ever to define the genre. Garfield is a drifter named Frank who wanders into the Twin Oaks, a bedraggled roadhouse owned by the curmudgeonly Nick (Cecil Kellaway) and his smokin' hot wife Cora (Turner), a platinum bombshell with a penchant for white linen suits and shorts that are tailored to her creamy flesh like fuzz on a peach. It's lust at first site for Cora and Frank, and almost in spite of themselves they start wondering how to get rid of Nick, with rules from the Cain playbook of tawdry schemes whose clumsy fits and starts end up very badly. Like Cain's Double Indemnity, which attained classic noir screen status two years earlier with Fred MacMurray and Barbara Stanwyck, Postman is brimming with subterfuge and sexuality. Turner and Garfield don't have exactly the right chemistry, but their coming together and tearing apart and coming together again is an irresistible slow burn of criminal passion. They can't really believe they're thinking and doing the things they are when it comes to plotting various accidental deaths that could befall Nick, and the plot gets even gooier when a cagy lawyer (a slick, sleek Hume Cronyn) gets involved in the case. Pushing along Postman's sexual subtext and intriguing narrative is gorgeous cinematography that ripples with brightness and shadow. The meticulously designed close-ups of Turner are some of the most stunning glamour poses in Hollywood history, with light glowing all around her and seeming to beam like an aura directly out of her radiant hair and perfect facial structure. One of the terrific extras on the disc is a lengthy feature about Turner's tumultuous, meteoric career. There's also "The John Garfield Story," and a pair of short subjects that make the entire Postman package a delightful and long-awaited entry into the pantheon of film noir on home video. --Ted Fry

The Fallen Idol (The Criterion Collectio...

The Night of the Hunter [Blu-ray]