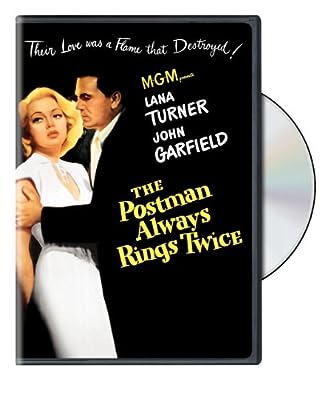 Price: $11.27
As of 2022-10-02 17:51:34 UTC (more info)
Product prices and availability are accurate as of 2022-10-02 17:51:34 UTC and are subject to change. Any price and availability information displayed on http://www.amazon.com/ at the time of purchase will apply to the purchase of this product.
Availability: Not Available - stock arriving soon
Buy Now from Amazon
Product Information (more info)
CERTAIN CONTENT THAT APPEARS ON THIS SITE COMES FROM AMAZON SERVICES LLC. THIS CONTENT IS PROVIDED 'AS IS' AND IS SUBJECT TO CHANGE OR REMOVAL AT ANY TIME.

Lana Turner stars in this sexually charged classic film noir thrillerabout the illicit love affair between a drifter and the restless wife ofa gruff, middle-aged roadhouse owner. Torn between a desperate need foreach other and their desire for money, they plot a murder--which leadsto shattering consequences.

Even under the heavy censorship of 1946 Hollywood, Lana Turner and John Garfield's libidinous desires burn up the screen in Tay Garnett's adaptation of James M. Cain's torrid crime melodrama. Platinum blond Turner is Cora, a restless sexpot stuck in a roadside diner married to mundane middle-aged fry cook Nick Smith (Cecil Kellaway) when handsome drifter Frank (Garfield) blows her way. It's lust at first sight, a rapacious desire that neither can break off, and before long they're plotting his demise--but in the wicked world of Cain nothing is that easy. Garnett's visual approach is subdued compared to the more expressionistic film noir of the period, but he's at no loss when he films the luminous Turner in her milky-white wardrobe. She radiates repressed sexuality and uncontrollable passion while Garfield's smart-talking loner Frank mixes street-smart swagger and scrappy toughness with vulnerability and sincere intensity. Costar Hume Cronyn cuts a cold, calculating figure as their conniving lawyer, a chilly character that only increases our feelings for the murderous couple, victims of an all consuming amour fou that drives their passions to extremes. --Sean Axmaker

The Third Man (The Criterion Collection)...