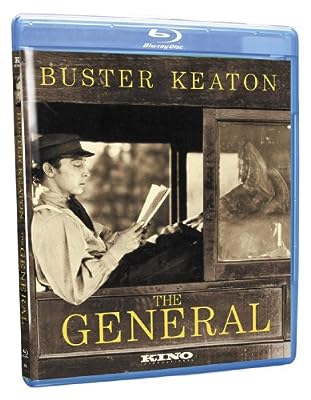 Price: $34.95
As of 2022-11-29 11:31:42 UTC (more info)
Product prices and availability are accurate as of 2022-11-29 11:31:42 UTC and are subject to change. Any price and availability information displayed on http://www.amazon.com/ at the time of purchase will apply to the purchase of this product.
Availability: Not Available - stock arriving soon
Buy Now from Amazon
Product Information (more info)
CERTAIN CONTENT THAT APPEARS ON THIS SITE COMES FROM AMAZON SERVICES LLC. THIS CONTENT IS PROVIDED 'AS IS' AND IS SUBJECT TO CHANGE OR REMOVAL AT ANY TIME.

Consistently ranked among the greatest films ever made, Buster Keaton s THE GENERAL is so brilliantly conceived and executed that it continues to inspire awe and laughter with every viewing. This Kino Ultimate 2 Disc Edition was mastered in HD from a 35mm archive print struck from the original camera negative. Rejected by the Confederate army as unfit, and taken for a coward by his beloved Annabelle Lee (Marion Mack), young Johnny Gray (Keaton) is given a chance to redeem himself when Yankee spies steal his cherished locomotive. Johnny wages a one-man war against hijackers, an errant cannon and the unpredictable hand of fate while roaring along the iron rails. Every shot has the authenticity and the unassuming correct composition of a Mathew Brady Civil War photograph, wrote film historian David Robinson, No one not even Griffith or Huston and certainly not Fleming (Gone With the Wind) caught the visual aspect of the Civil War as Keaton did.

SPECIAL FEATURES:
- Three musical scores to choose from:
(1) Music composed and conducted by Carl Davis, performed by The Thames Silents Orchestra (in 5.1 Stereo Surround or 2.0 Stereo)
(2) Music arranged and directed by Robert Israel
(3) Theatre organ score by Lee Erwin
- A video tour of the authentic General, presented in association with The Southern Museum
- A tour of the filming locations, presented by John Bengtson, author of Silent Echoes
- Behind-the-scenes home movie footage
- Filmed introduction by Gloria Swanson
- Filmed introduction by Orson Welles
- The Buster Express, a brisk montage of train gags from throughout Keaton s career