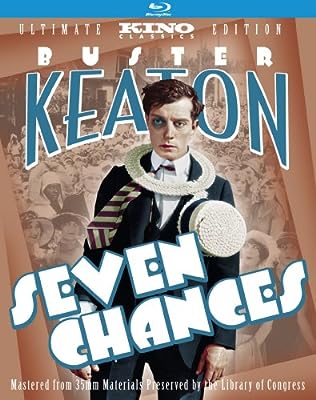 Price: $34.95
Availability: Not Available - stock arriving soon
Buy Now from Amazon
Product Information (more info)
CERTAIN CONTENT THAT APPEARS ON THIS SITE COMES FROM AMAZON SERVICES LLC. THIS CONTENT IS PROVIDED 'AS IS' AND IS SUBJECT TO CHANGE OR REMOVAL AT ANY TIME.

Love has never been funnier or more difficult to manage than in the immortal Keaton comedies. Seven Chances is a film often imitated but never rivaled for hilarity and visual virtuosity. Keaton stars as Jimmie Shannon, a romantically jinxed young man who must marry by 7:00 PM to inherit seven million dollars. While fate seems to thwart his efforts to woo the object of his true affection (Ruth Dwyer), public announcement of his strange predicament provides him with a throng of would-be brides who are aggressive in their pursuit of a husband, to say the least. In one of the most rousing, brilliantly choreographed sequences in Keaton's career, Shannon flees the horde of women while dodging the hostile forces of nature that seem to be conspiring against him (in the form of a colossal rockslide) during his manic dash to the altar. SPECIAL FEATURES: TBD

The Thief of Bagdad (Deluxe Edition)

A Trip To The Moon & The Extraordina...