The Firemen's Ball (The Criterion Collection) 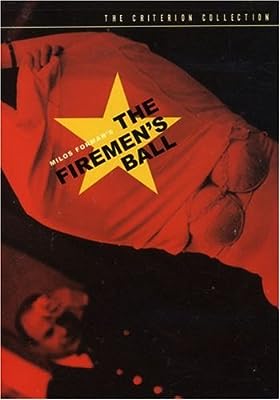 Price: $133.56
As of 2023-02-07 23:23:23 UTC (more info)
Product prices and availability are accurate as of 2023-02-07 23:23:23 UTC and are subject to change. Any price and availability information displayed on http://www.amazon.com/ at the time of purchase will apply to the purchase of this product.
Availability: Not Available - stock arriving soon
Buy Now from Amazon
Product Information (more info)
CERTAIN CONTENT THAT APPEARS ON THIS SITE COMES FROM AMAZON SERVICES LLC. THIS CONTENT IS PROVIDED 'AS IS' AND IS SUBJECT TO CHANGE OR REMOVAL AT ANY TIME.

A milestone of the Czech New Wave, Milos Forman's first color film The Firemen's Ball (Horí, má panenko) is both a dazzling comedy and a provocative political satire. A hilarious saga of good intentions confounded, the story chronicles a firemen's ball where nothing goes right-from a beauty pageant whose reluctant participants embarrass the organizers to a lottery from which nearly all the prizes are pilfered. Presumed to be a commentary on the floundering Czech leadership, the film was "banned forever" in Czechoslovakia following the Russian invasion and prompted Forman's move to America.

Loves of a Blonde (The Criterion Collect...