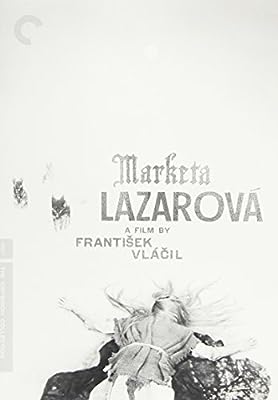 Price: $29.95
As of 2021-12-02 19:42:35 UTC (more info)
Product prices and availability are accurate as of 2021-12-02 19:42:35 UTC and are subject to change. Any price and availability information displayed on http://www.amazon.com/ at the time of purchase will apply to the purchase of this product.
Availability: Not Available - stock arriving soon
Buy Now from Amazon
Product Information (more info)
CERTAIN CONTENT THAT APPEARS ON THIS SITE COMES FROM AMAZON SERVICES LLC. THIS CONTENT IS PROVIDED 'AS IS' AND IS SUBJECT TO CHANGE OR REMOVAL AT ANY TIME.

In its home country, František Vlácil’s Marketa Lazarová has been hailed as the greatest Czech film ever made; for many U.S. viewers, it will be a revelation. Based on a novel by Vladislav Vancura, this stirring and poetic depiction of a feud between two rival medieval clans is a fierce, epic, and meticulously designed evocation of the clashes between Christianity and paganism, humankind and nature, love and violence. Vlácil’s approach was to re-create the textures and mentalities of a long-ago way of life, rather than to make a conventional historical drama, and the result is dazzling. With its inventive widescreen cinematography, editing, and sound design, Marketa Lazarová is an experimental action film.

The Shop On Main Street (The Criterion C...

The Firemen's Ball (The Criterion Collec...