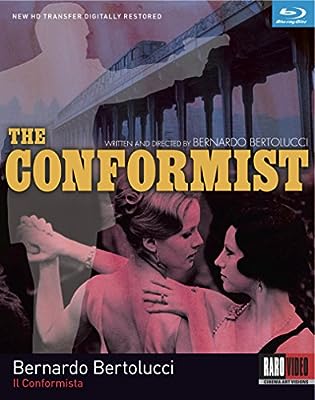 Price: $29.95
As of 2023-02-05 17:15:09 UTC (more info)
Product prices and availability are accurate as of 2023-02-05 17:15:09 UTC and are subject to change. Any price and availability information displayed on http://www.amazon.com/ at the time of purchase will apply to the purchase of this product.
Availability: Not Available - stock arriving soon
Buy Now from Amazon
Product Information (more info)
CERTAIN CONTENT THAT APPEARS ON THIS SITE COMES FROM AMAZON SERVICES LLC. THIS CONTENT IS PROVIDED 'AS IS' AND IS SUBJECT TO CHANGE OR REMOVAL AT ANY TIME.

In one of the greatest of all art films comes Bernardo Bertolucci's The Conformist; a film that combines the controversial topics of politics and sexuality into one of the most fascinating and complex character studies in all of film history. The Conformist tells the story about the rise and fall of Italian Fascism between the years of 1920 until 1943; and it also makes for an interesting contrast with the main character Marcello Clerici who has an obsession with conforming to what he sees is normal and acceptable in Italian society. It is based on a book adaptation by Alberto Moravia, as the structure of the film is shot mostly through several non sequential flashbacks and memories through Marcello all while Marcello and his loyal chauffeur make their drive to commit an assassination on an exiled anti-Fascist who was once Marcello's college professor

In Mussolini's Italy, repressed Jean-Louis Trintignant, trying to purge memories of a youthful, homosexual episode--and murder--joins the Fascists in a desperate attempt to fit in. As the reluctant Judas motors to his personal Gethsemane (the assassination of his leftist mentor), he flashes back to a dance party for the blind; an insane asylum in a stadium; and wife Stefania Sandrelli and lover Dominique Sanda dancing the tango in a working class hall. But those are only a few of this political thriller's anthology pieces, others including Trintignant's honeymoon coupling with Sandrelli in a train compartment as the sun sets outside their window; a bimbo lolling on the desk of a fascist functionary, glimpsed in the recesses of his cavernous office; a murder victim's hands leaving bloody streaks on a limousine parked in a wintry forest. Bernardo Bertolucci's masterpiece, adapted from the Alberto Moravia novel, boasts an authentic Art Deco look created by production designer Ferdinando Scarfiotti, a score by the great Georges Delerue (Contempt, Jules and Jim, and That Man From Rio) and breathtaking color cinematography by Vittorio Storaro.

The Conformist is not only brilliant in its mysterious and complex character study of the ordinary man, but of its fascinating Freudian themes of sexuality and politics, showing how a man will mindlessly sacrifice his own individual values just to blend it with society. He joins the Italian Fascist movement not because he necessarily believes in it, and gets engaged to a boring and dull housewife, not necessarily because he is in love with her. He just wants to fit in on what society looks at as acceptable and will live his traditional life not how he truly wants to live it but rather how others think he should. And yet The Conformist has some of the most extraordinary cinematography ever committed to celluloid; containing striking and breathtaking composition shots of the clothes, automobiles, architecture and the décor of the historical 1930's Italian era.