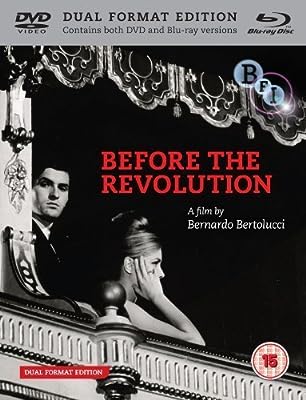 Price: $33.98
As of 2022-07-03 02:21:12 UTC (more info)
Product prices and availability are accurate as of 2022-07-03 02:21:12 UTC and are subject to change. Any price and availability information displayed on http://www.amazon.com/ at the time of purchase will apply to the purchase of this product.
Availability: Not Available - stock arriving soon
Buy Now from Amazon
Product Information (more info)
CERTAIN CONTENT THAT APPEARS ON THIS SITE COMES FROM AMAZON SERVICES LLC. THIS CONTENT IS PROVIDED 'AS IS' AND IS SUBJECT TO CHANGE OR REMOVAL AT ANY TIME.

United Kingdom released, Blu-Ray/Region B : it WILL NOT play on regular DVD player, or on standard US Blu-Ray player. You need multi-region Blu-Ray player to view it in USA/Canada: LANGUAGES: Italian ( Dolby Digital 2.0 ), Italian ( Dolby Linear PCM ), English ( Subtitles ), WIDESCREEN (1.85:1), SPECIAL FEATURES: Black & White, Booklet, Cast/Crew Interview(s), Interactive Menu, Remastered, Scene Access, Trailer(s), SYNOPSIS: The study of a youth on the edge of adulthood and his aunt, ten years older. Fabrizio is passionate, idealistic, influenced by Cesare, a teacher and Marxist, engaged to the lovely but bourgeois Clelia, and stung by the drowning of his mercurial friend Agostino, a possible suicide. Gina is herself a bundle of nervous energy, alternately sweet, seductive, poetic, distracted, and unhinged. They begin a love affair after Agostino's funeral, then Gina confuses Fabrizio by sleeping with a stranger. Their visits to Cesare and then to Puck, one of Gina's older friends, a landowner losing his land, dramatize contrasting images of Italy's future. Their own futures are bleak. ...Before the Revolution (1964) ( Prima della rivoluzione )