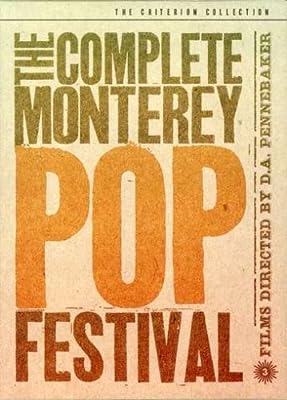 Price: $79.95
As of 2022-10-07 18:57:41 UTC (more info)
Product prices and availability are accurate as of 2022-10-07 18:57:41 UTC and are subject to change. Any price and availability information displayed on http://www.amazon.com/ at the time of purchase will apply to the purchase of this product.
Availability: Not Available - stock arriving soon
Buy Now from Amazon
Product Information (more info)
CERTAIN CONTENT THAT APPEARS ON THIS SITE COMES FROM AMAZON SERVICES LLC. THIS CONTENT IS PROVIDED 'AS IS' AND IS SUBJECT TO CHANGE OR REMOVAL AT ANY TIME.

DISC THREE: "Monterey Pop -- The Outtake Performance" Two hours of performances not included in the original film, from the following artists: Buffalo Springfield performing "For What It's Worth, " The Association, Big Brother and the Holding Company, The Blues Project, The Byrds, The Paul Butterfield Blues Band, Country Joe and the Fish, The Electric Flag, Jefferson Airplane, Al Kooper, The Mamas and the Papas, Laura Nyro, Quicksilver Messenger Service, Simon and Garfunkel, Tiny Tim, and The Who.

The Monterey International Pop Festival, the three-day event staged in 1967 that has become one of rock music's most famous and in some ways greatest concerts, gets the royal treatment with this three-disc boxed set.

Material on two of the three discs has already been widely available. Monterey Pop, D.A. Pennebaker's 79-minute, 1968 film, effectively sets the scene for the festival, which took place during the fabled "Summer of Love," when the hippie ethos was in its fullest flower, especially on the West Coast. And while not all the featured performances are thrilling, those that are--principally by the Who, Jimi Hendrix, and the amazing Ravi Shankar--are worth the price of admission, especially in the high-definition digital transfer and new 5.1 mix seen and heard here. The same can be said for Jimi Plays Monterey and Shake! Otis at Monterey, which appear in the boxed set on a separate disc and provide a much fuller look at Hendrix's and Otis Redding's incendiary sets (literally, in the former case).

Those two discs are also loaded with bonus features, including audio commentary by Pennebaker, festival producer Lou Adler (on Monterey Pop), and author Peter Guralnick (Shake!); audio-only remarks by some of the performers; photos; trailers; and other material. There's also a substantial booklet, filled with essays and photos. But it's the third disc, "The Outtake Performances," comprising some two hours of music that didn't make the final film edit, that will be of most interest to many viewers. The disc supplies a taste of some of the artists who didn't appear in Monterey Pop at all (the Byrds, Buffalo Springfield, Quicksilver Messenger Service), and a more complete look at some who did (the Who, Simon and Garfunkel, the Mamas and the Papas). A nice addition to an already very impressive DVD collection. --Sam Graham

The Harder They Come (The Criterion Coll...