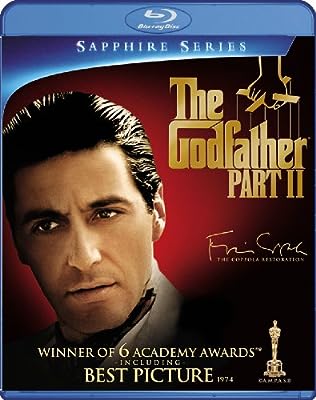 Price: $15.99
As of 2022-10-04 05:13:21 UTC (more info)
Product prices and availability are accurate as of 2022-10-04 05:13:21 UTC and are subject to change. Any price and availability information displayed on http://www.amazon.com/ at the time of purchase will apply to the purchase of this product.
Availability: Not Available - stock arriving soon
Buy Now from Amazon
Product Information (more info)
CERTAIN CONTENT THAT APPEARS ON THIS SITE COMES FROM AMAZON SERVICES LLC. THIS CONTENT IS PROVIDED 'AS IS' AND IS SUBJECT TO CHANGE OR REMOVAL AT ANY TIME.

The sequel to The Godfather shows us the world of Don Vito Corleone before and after the story in the original film. Pacino is his son Michael, who struggles to bring the family into the modern age. In the film's extended flashback sequences, DeNiro is the young Vito as he gains power in the New York City Mafia.