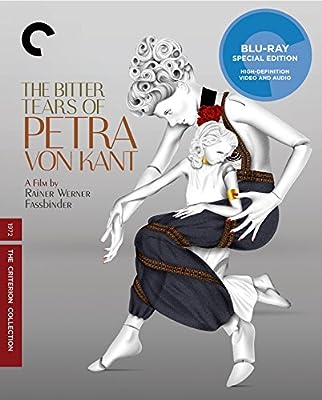 Price: $27.99
As of 2022-10-03 09:26:04 UTC (more info)
Product prices and availability are accurate as of 2022-10-03 09:26:04 UTC and are subject to change. Any price and availability information displayed on http://www.amazon.com/ at the time of purchase will apply to the purchase of this product.
Availability: Not Available - stock arriving soon
Buy Now from Amazon
Product Information (more info)
CERTAIN CONTENT THAT APPEARS ON THIS SITE COMES FROM AMAZON SERVICES LLC. THIS CONTENT IS PROVIDED 'AS IS' AND IS SUBJECT TO CHANGE OR REMOVAL AT ANY TIME.

In the early 1970s, Rainer Werner Fassbinder (Berlin Alexanderplatz) discovered the American melodramas of Douglas Sirk and was inspired by them to begin working in a new, more intensely emotional register. One of the earliest and best-loved films of this period in his career is The Bitter Tears of Petra von Kant, which balances a realistic depiction of tormented romance with staging that remains true to the director’s roots in experimental theater. This unforgettable, unforgiving dissection of the imbalanced relationship between a haughty fashion designer (Margit Carstensen) and a beautiful but icy ingenue (Hanna Schygulla)—based, in a sly gender reversal, on the writer-director’s own desperate obsession with a young actor—is a fully Fassbinder affair, featuring exquisitely claustrophobic cinematography by Michael Ballhaus (The Last Temptation of Christ) and full-throttle performances by an all-female cast.