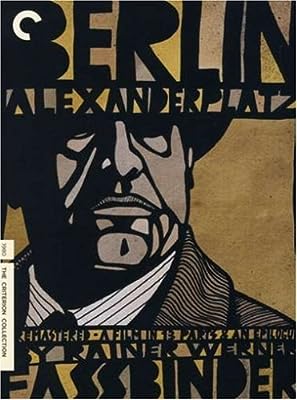 Price: $75.14
As of 2022-11-27 19:18:04 UTC (more info)
Product prices and availability are accurate as of 2022-11-27 19:18:04 UTC and are subject to change. Any price and availability information displayed on http://www.amazon.com/ at the time of purchase will apply to the purchase of this product.
Availability: Not Available - stock arriving soon
Buy Now from Amazon
Product Information (more info)
CERTAIN CONTENT THAT APPEARS ON THIS SITE COMES FROM AMAZON SERVICES LLC. THIS CONTENT IS PROVIDED 'AS IS' AND IS SUBJECT TO CHANGE OR REMOVAL AT ANY TIME.

Rainer Werner Fassbinder s wildly controversial fifteen-hour-plus Berlin Alexanderplatz, based on Alfred Döblin s great modernist novel, was the crowning achievement of a prolific director who, at age thirty-four, had already made forty films. Fassbinder s immersive epic, restored in 2006 and available on DVD in this country for the first time, follows the hulking, violent, yet strangely childlike ex-convict Franz Biberkopf (Günter Lamprecht) as he attempts to become an honest soul amidst the corrosive urban landscape of Weimar-era Germany. With equal parts cynicism and humanity, Fassbinder details a mammoth portrait of a common man struggling to survive in a viciously uncommon time.

Rainer Werner Fassbinder’s epic adaptation of Alfred Döblin’s German novel, written (and set) between two world wars in the 20th century, is still every bit the towering achievement it appeared to be upon the episodic, 15-hour film’s 1983 theatrical release in America. The story of a hapless lug buffeted by forces of discontent and disastrous change in Germany--following the country’s defeat at Versailles and during the rise of the Third Reich--Berlin Alexanderplatz is a roaming, hulking nightmare about people with no control over their destinies. The film opens with central character Franz Biberkopf (Gunter Lamprecht) struggling to reintegrate into the world after a four-year incarceration for murdering his girlfriend. Half-mad with guilt, sensory overload, sexual starvation and general disorientation, Franz goes in search of a plan for survival but finds the ground constantly shifting beneath his feet. Hooking up with the docile Lina (Elisabeth Trissenaar), Franz vows to straighten out his life and avoid his old tendencies toward petty thievery and pimping. But the alternatives are typically eclipsed by bad luck, unstoppable impulses, temptation and violent opposition between crime and order, Communists and fascists, dreamers and scoundrels. Over time, Franz becomes everything from shoelace salesman to Nazi sympathizer to pawn of a crime boss to victim of his fate. Along the way, he falls apart repeatedly, then picks himself up to see what might come next. Unfortunately, what comes next is generally another peek into the social and economic chaos of his time. Fassbinder, who died at age 36 before Berlin Alexanderplatz was released theatrically in America, found in Döblin’s story something akin to the running theme of despair in his own, prolific output of 40 movies. Among his several masterpieces, Berlin Alexanderplatz is in a league of its own, not to be missed. --Tom Keogh