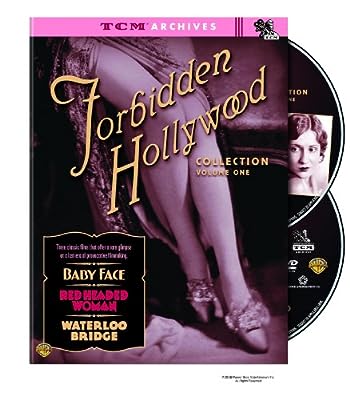 Price: $39.92
As of 2023-02-08 04:05:12 UTC (more info)
Product prices and availability are accurate as of 2023-02-08 04:05:12 UTC and are subject to change. Any price and availability information displayed on http://www.amazon.com/ at the time of purchase will apply to the purchase of this product.
Availability: Not Available - stock arriving soon
Buy Now from Amazon
Product Information (more info)
CERTAIN CONTENT THAT APPEARS ON THIS SITE COMES FROM AMAZON SERVICES LLC. THIS CONTENT IS PROVIDED 'AS IS' AND IS SUBJECT TO CHANGE OR REMOVAL AT ANY TIME.

In the early 1930s, before Hollywood began enforcing a self-imposed Production Code, many films allowed for extraordinary frankness, including nudity, adultery and prostitution, featured in this restored and remastered three-movie collection. Saucy Jean Harlow shrewdly vamps unwitting exeuctives to get what she wants in Red-Headed Woman (1932; Disc 1), scripted by Anita Loos (Gentlemen Prefer Blondes). James Whale (Frankenstein) directs Waterloo Bridge (1931; Disc 1), starring Mae Clarke in the gritty first film version of the acclaimed wartime romance. Added to the National Film Registry in 2005, Baby Face (1933; Disc 2) stars Barbara Stanwyck as an amoral beauty who sleeps her way to the top. This collection boasts both the Original Theatrical Release and a Prerelease Version, rediscovered and restored by the Library of Congress, before censors of the day demanded the elimination of several scenes.

Here are three films that couldn't and wouldn't have been made at any other time. Contrary to popular belief, the history of Hollywood permissiveness, what filmmakers could "get away with" on screen, is not a steadily rising graph from puritanical early days to the party-hearty present. In the early 1930s, a national mood of shock over the stock market crash and impatience with Prohibition licensed a relaxation of the movie industry's self-censorship policies. Sexuality--always a driving force in movie plots and characterizations, even when repressed--became a more explicit presence, with costuming that sometimes pushed the envelope for exposure of epidermis and dialogue that could be shockingly blunt.

Baby Face (1933) was made at Warner Bros., the golden-age studio with the grittiest style and the most street cred. The gutsy Barbara Stanwyck stars as a young woman from a factory town who hops a boxcar to the big city and sleeps her way to the top--a progress famously indexed by a camera ascending floor by floor outside a Gotham office building as she trades up, one corporate suitor after another. No other major-studio film was more explicit about sex as a tool and a commodity, yetBaby Face is curiously less sexy than any number of movies that weren't so outspoken about it. This TCM collection features both the theatrical-release version familiar for decades and a recently rediscovered preview version that is markedly superior, runs five minutes longer, and includes more sexual liaisons. It also happily lacks an absurd final scene that got tacked onto the release version to explain how the heroine learned to be content with a modest lifestyle.

Red-Headed Woman (1932) is arguably the raunchiest movie Jean Harlow made at MGM (though not as raunchy as her scenes in Howard Hughes' 1930 Hell's Angels). Unlike Stanwyck in Baby Face--a proletarian heroine grimly selling herself to beat capitalism and the patriarchy at their own game--Harlow's character brazenly relishes both the sex and the posh life it wins for her. The lion's share of this sardonic comedy, scripted by Anita Loos and an uncredited F. Scott Fitzgerald, focuses on Harlow's seduction of her married boss (Chester Morris) and the havoc she wreaks in his upper-crust world. Charles Boyer has a role (his first Hollywood credit) as a French chauffeur who knows how to give satisfaction, and the film's air of breezy ribaldry even allows the star a casual flash of bare breast.

The rarest item in the collection, the 1931 Universal version of Waterloo Bridge, has long been unseen because MGM bought the film in order to do a 1940 remake (starring Vivien Leigh) and locked the original away in the vault. Directed by James Whale the same year he did Frankenstein (1931), the picture charts the romance of a chorus-girl-turned-streetwalker (Mae Clarke) and a well-born young soldier (Kent Douglass) on brief furlough from the trenches during WWI. Apart from a zesty prelude in a London music hall and two scenes on the titular bridge, the film remains yoked to its talky theatrical source, a Robert E. Sherwood play flogging the hoary conceit that no fallen woman, however pure of heart, could be permitted to marry into a good family. Unlike the Hays Code-compliant remake, the film leaves no doubt how the heroine makes her living. --Richard T. Jameson

Talk to Her (Hable con Ella)

Three Crowns of the Sailor