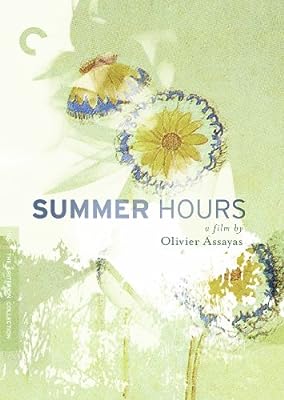 Price: $29.99
As of 2023-02-04 11:26:09 UTC (more info)
Product prices and availability are accurate as of 2023-02-04 11:26:09 UTC and are subject to change. Any price and availability information displayed on http://www.amazon.com/ at the time of purchase will apply to the purchase of this product.
Availability: Not Available - stock arriving soon
Buy Now from Amazon
Product Information (more info)
CERTAIN CONTENT THAT APPEARS ON THIS SITE COMES FROM AMAZON SERVICES LLC. THIS CONTENT IS PROVIDED 'AS IS' AND IS SUBJECT TO CHANGE OR REMOVAL AT ANY TIME.

Widely hailed by critics as 2009s best film, SUMMER HOURS is the great contemporary French filmmaker Olivier Assayass most personal film to date. Three siblings, played by Juliette Binoche, Charles Berling, and J'r'mie Renier, must decide what to do with the country estate and objects theyve inherited from their mother. From this simple story, Assayas creates a nuanced, exquisitely made drama about the material of globalized modern living. Naturalistic and unsentimental yet suffused with genuine warmth, this is that rare film that pays respect to family by treating it with honesty.

For a film about objects, Summer Hours presents a surprisingly affecting scenario. Then again, Olivier Assayas has never taken the easy road to catharsis. It's no spoiler to note that Hélène Berthier (Edith Scob) passes away shortly after her 75th birthday party, at which she tells her three children, Frédéric (Charles Berling), Adrienne (Juliette Binoche), and Jérémie (Jérémie Renier), that they're free to do whatever they want with her belongings The niece of a renowned painter, Hélène leaves behind a collection of art deco furnishings and precious objets d'art, including Musée d'Orsay-loaned pieces by Degas and Redon. Were he a different kind of director, the superficial would lock horns with the righteous, but these characters aren't quite so simplistic. Frédéric, who resides in France with his wife and teenage daughter, wishes to leave everything as it is, but Adrienne lives in New York with her boyfriend (played by Clint Eastwood's son, Kyle) and Jérémie lives in China with his wife and young children, so they hatch a plan that meets everyone's unique needs. Largely devoid of music, once an Assayas signature, the movie ends with a raucous house party that recalls his 1994 feature Cold Water, and Berling (Les Destinées, Demonlover) continues to do some of his finest work for the filmmaker, anchoring this deceptively rich picture with his subtle performance. Summer Hours marks a return to form for Assayas (after the stylishly inert Boarding Gate) and offers a rewarding new twist on the family melodrama. --Kathleen C. Fennessy