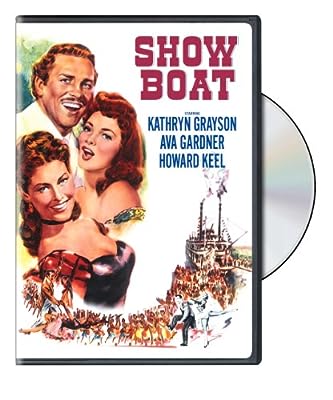 Price: $19.98
As of 2022-08-18 08:13:37 UTC (more info)
Product prices and availability are accurate as of 2022-08-18 08:13:37 UTC and are subject to change. Any price and availability information displayed on http://www.amazon.com/ at the time of purchase will apply to the purchase of this product.
Availability: Not Available - stock arriving soon
Buy Now from Amazon
Product Information (more info)
CERTAIN CONTENT THAT APPEARS ON THIS SITE COMES FROM AMAZON SERVICES LLC. THIS CONTENT IS PROVIDED 'AS IS' AND IS SUBJECT TO CHANGE OR REMOVAL AT ANY TIME.

One of the greatest Broadway musicals comes to the screen in this tale of music, racial bigotry and enduring love as outsized as the American heartland set aboard a Mississippi River Show Boat. Magnolia Brown has grown up onboard a sailing theater, plying the river from town to town to entertain people, and she has always dreamed of a life on stage. When the star's, Julie LaVerne part African American ancestry is revealed and she is forced to leave, Magnolia steps in to take Julie's place on stage. Magnolia soon falls in love with her leading man, the handsome gambler and rogue, Gaylord Ravenal (Howard Keel--Kiss Me Kate, Seven Brides for Seven Brothers), and the two marry, have a daughter and live happily--for a while. But Ravenal's gambling debts force Magnolia to find a job, and Julie LaVerne again leaves her starring role--this time voluntarily--to give Magnolia the break she needs, an opportunity that leads to stardom.

The show that first defined the Broadway musical has never come to the screen intact, despite three tries. But take this splashy 1951 MGM extravaganza on its own terms, and it boggles the eyes. Not to mention the ears: The Kern-Hammerstein score includes some staples of the American songbook, such as "Make Believe," "After the Ball," and "Can't Help Lovin' That Man." Perhaps a riverboat gambler is almost too-easy casting for Howard Keel, and Kathryn Grayson is overly twittery, which may be why the film's middle sags when they take center stage. But any time the uncannily beautiful Ava Gardner smolders, a lush tragic undertone takes over (even if the most interesting parts of her story seem to take place offscreen). The physical production is extraordinary: the busy riverside setting, the outrageous color design, and best of all an "Old Man River" (sung by William Warfield) staged in the mists of morning. -- Robert Horton