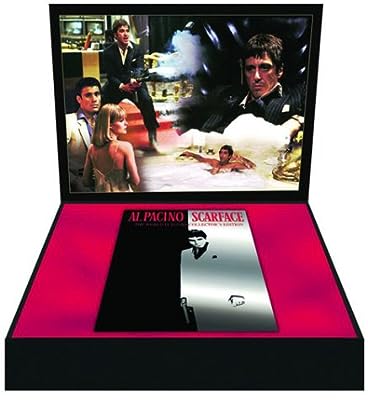 Price: $19.98
As of 2022-08-18 04:39:42 UTC (more info)
Product prices and availability are accurate as of 2022-08-18 04:39:42 UTC and are subject to change. Any price and availability information displayed on http://www.amazon.com/ at the time of purchase will apply to the purchase of this product.
Availability: Not Available - stock arriving soon
Buy Now from Amazon
Product Information (more info)
CERTAIN CONTENT THAT APPEARS ON THIS SITE COMES FROM AMAZON SERVICES LLC. THIS CONTENT IS PROVIDED 'AS IS' AND IS SUBJECT TO CHANGE OR REMOVAL AT ANY TIME.

In the spring of 1980, the port at Mariel Harbor was opened, and thousands set sail for the United States. They came in search of the American Dream. One of them found it on the sun-washed avenues of Miami… wealth, power and passion beyond his wildest dreams. He was Tony Montana. The world will remember him by another name… Scarface.

Scarface (1983)
This sprawling epic of bloodshed and excess, Brian De Palma's update of the classic 1932 crime drama by Howard Hawks, sparked controversy over its outrageous violence when released in 1983. Scarface is a wretched, fascinating car wreck of a movie, starring Al Pacino as a Cuban refugee who rises to the top of Miami's cocaine-driven underworld, only to fall hard into his own deadly trap of addiction and inevitable assassination. Scripted by Oliver Stone and running nearly three hours, it's the kind of film that can simultaneously disgust and amaze you (critic Pauline Kael wrote "this may be the only action picture that turns into an allegory of impotence"), with vivid supporting roles for Steven Bauer, Michelle Pfeiffer, Mary Elizabeth Mastrantonio, and Robert Loggia. --Jeff Shannon

Scarface (1932)
Howard Hawks's Scarface was one of the first "talkies" to reclaim the fluidity of the late-silent masterpieces, while also tapping into a feral new energy that came with talking smart and moving smarter on the motion picture screen. Outgunning such contemporaries as Little Caesar and The Public Enemy--in terms of both its ferocious death-dealing and dynamic style--the movie was interfered with by censors and kept out of circulation for decades thanks to its eccentric producer, Howard Hughes. It remains the gold standard among classic gangster pictures. Paul Muni's portrayal of Al Capone surrogate Tony Camonte etched a screen original: a merciless assassin who's not only reflexively criminal but pre-civilized, almost pre-evolutionary, a simian shadow ready to rub out the world if he can't have it for his own. This is still one of the greatest, darkest, most deeply exciting films American cinema has produced. Those demonically ubiquitous X's--starting with that titular scar gouged into Tony's cheek--rival "Rosebud" for resonance. --Richard T. Jameson