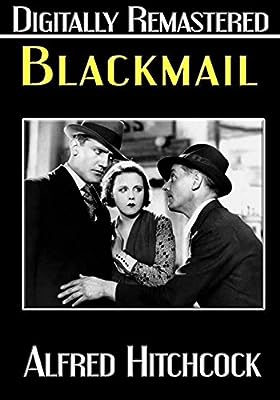 Price: $9.99
As of 2022-10-07 11:19:13 UTC (more info)
Product prices and availability are accurate as of 2022-10-07 11:19:13 UTC and are subject to change. Any price and availability information displayed on http://www.amazon.com/ at the time of purchase will apply to the purchase of this product.
Availability: Not Available - stock arriving soon
Buy Now from Amazon
Product Information (more info)
CERTAIN CONTENT THAT APPEARS ON THIS SITE COMES FROM AMAZON SERVICES LLC. THIS CONTENT IS PROVIDED 'AS IS' AND IS SUBJECT TO CHANGE OR REMOVAL AT ANY TIME.

Blackmail is a 1929 British thriller drama film directed by Alfred Hitchcock and starring Anny Ondra, John Longden, and Cyril Ritchard. Based on the play Blackmail by Charles Bennett, the film is about a London woman who is blackmailed after killing a man who tries to rape her.

Anny Ondra plays Alice White who, while having dinner in a fancy English nightspot with her husband-to-be, Scotland Yard Detective Frank Webber (John Longden), flirts with an artist (Cyril Richard) seated at the next table. The artist invites her up to see his studio and she goes but balks when the artist asks her to pose in the nude. When the request becomes a demand, Alice stabs him to death. She rejoins her fiancé and tries to forget the murder but her conscience keeps bothering her. To make matters worse, sniveling rat Tracy (Donald Calthrop) materializes to blackmail Alice for the crime.

Although Blackmail began production as a silent film, it became Hitchcockâ€™s first sound â€œall-talkieâ€ feature and a critical and commercial hit.