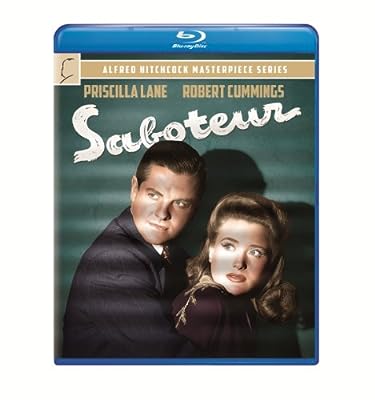 Price: $11.14
As of 2023-02-06 12:10:30 UTC (more info)
Product prices and availability are accurate as of 2023-02-06 12:10:30 UTC and are subject to change. Any price and availability information displayed on http://www.amazon.com/ at the time of purchase will apply to the purchase of this product.
Availability: Not Available - stock arriving soon
Buy Now from Amazon
Product Information (more info)
CERTAIN CONTENT THAT APPEARS ON THIS SITE COMES FROM AMAZON SERVICES LLC. THIS CONTENT IS PROVIDED 'AS IS' AND IS SUBJECT TO CHANGE OR REMOVAL AT ANY TIME.

Alfred Hitchcock’s Saboteur is a riveting wartime thriller following an innocent man who suddenly finds himself in a very deadly situation. After aircraft factory worker Barry Kane (Robert Cummings) witnesses his plant’s firebombing by a Nazi agent, he finds himself falsely accused of sabotage and killing his best friend. To clear his name, Kane begins a relentless cross-country chase that takes him from Los Angeles to Boulder Dam and New York’s Radio City Music Hall. The suspense builds to a climactic finale atop the Statue of Liberty that has become one of the most iconic scenes ever filmed by the Master of Suspense.