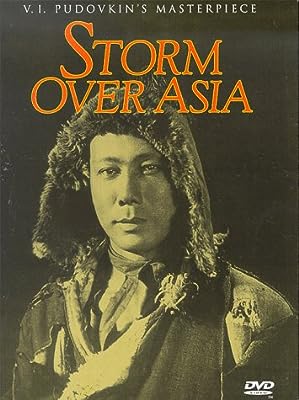 Price: $35.66
Availability: Not Available - stock arriving soon
Buy Now from Amazon
Product Information (more info)
CERTAIN CONTENT THAT APPEARS ON THIS SITE COMES FROM AMAZON SERVICES LLC. THIS CONTENT IS PROVIDED 'AS IS' AND IS SUBJECT TO CHANGE OR REMOVAL AT ANY TIME.

Soviet master filmmaker V. I. Pudovkin's "Storm Over Asia" is a revolutionary masterpiece. Described by critics as an "epic poem," "Storm Over Asia" is set in the remote region of Mongolia where a young man is mistaken as a descendant of the great warrior Genghis Khan. When he is made a puppet ruler, he must decide where his loyalties lay.

The last of the three great films that V.I. Pudovkin directed in the 1920s, Storm over Asia (1928) is an acknowledged classic of Soviet silent cinema. Filmed largely on location in Mongolia, the film has an authentic documentary feel, though the story is a stirring melodrama, about a young fur trapper who is mistreated by the occupying forces in the civil war and becomes a leader of the partisans. Pudovkin enjoys caricaturing the foreign (British) troops and the medieval rituals of a Buddhist temple, but it's out on the steppes that he really comes into his own, with panoramic shots of the vast landscapes. Together with Mother (1926) and The End of St. Petersburg (1927), Storm over Asia (also known as The Heir to Genghis Khan) entitles Pudovkin to be ranked with Sergei Eisenstein and Dziga Vertov as a master of the Soviet montage style, which he expounded in his book Film Technique (1929). --Ed Buscombe