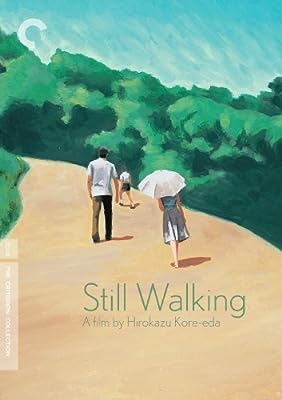 Price: $22.99
As of 2022-10-04 02:18:28 UTC (more info)
Product prices and availability are accurate as of 2022-10-04 02:18:28 UTC and are subject to change. Any price and availability information displayed on http://www.amazon.com/ at the time of purchase will apply to the purchase of this product.
Availability: Not Available - stock arriving soon
Buy Now from Amazon
Product Information (more info)
CERTAIN CONTENT THAT APPEARS ON THIS SITE COMES FROM AMAZON SERVICES LLC. THIS CONTENT IS PROVIDED 'AS IS' AND IS SUBJECT TO CHANGE OR REMOVAL AT ANY TIME.

The lyrical, profoundly moving STILL WALKING is the most personal work to date from contemporary Japanese master Hirokazu Kore-eda (Maborosi, After Life, Nobody Knows). Fashioned as a tribute to his parents, the film depicts one day in the life of the Yokoyamas, gathered together for a celebratory ritual that only gradually makes itself clear. Rather than focus on big dramatic moments, Kore-eda relies on simple gestures and domestic routines (especially cooking) to evoke a family's entire life, its deep regrets and its daily joys. Featuring vivid, heartrending performances and a gentle naturalism that harks back to the director's earlier, documentary work, STILL WALKING is an extraordinary portrayal of the ties that bind us.

Little things mean a lot in Still Walking, Japanese director Hirokazu Kore-eda's quiet, finely observed look at a day in the life of the Yokoyama clan. The family has gathered to observe the anniversary of the passing of eldest son Junpei, who died while saving a young child from drowning. That was 15 years ago, but Junpei's ghost still hovers over their lives--especially those of patriarch Kyohei (Yoshio Harada) and son Ryota (Hiroshi Abe). Kyohei's resentment of his remaining son, whose transgressions seem to consist of still being alive and opting not to follow in his father's footsteps and become a doctor, is palpable ("Oh, you're here," he mutters when Ryo arrives). But the old man is nasty to nearly everyone, refusing to pose for a family photo, squabbling endlessly with his own wife (Kirin Kiki) and disdaining Ryo's spouse (a widow with a son), bitterly scorning the young man whose life Junpei saved (and who shows up to pay his respects, much to the discomfort of all concerned), and rejecting the attempts by chirpy daughter Chinami (pop singer You) to make him lighten up. In truth, not much happens in this movie. There are no special effects, no action per se, no traumatic events, no major plot developments (in fact, there's really no plot at all), and only one small surprise at the very end. Kore-eda's brilliance is revealed in the details; when the tall, rangy Ryo bangs his head on a doorway, it's a sign that he no longer fits in the house he grew up in, while isolated shots (broken tile in the bathroom, a child's hand on a piano keyboard, corn tempura frying in a pan--there are lots of food images) are the subtle signs of a master at work. This offering from the reliably excellent Criterion Collection includes a making-of featurette, interviews with the director and cinematographer, and even a booklet with recipes for the food we see cooked in the film. --Sam Graham