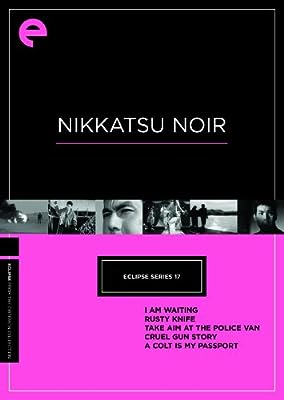 Price: $49.99
As of 2022-10-04 17:21:38 UTC (more info)
Product prices and availability are accurate as of 2022-10-04 17:21:38 UTC and are subject to change. Any price and availability information displayed on http://www.amazon.com/ at the time of purchase will apply to the purchase of this product.
Availability: Not Available - stock arriving soon
Buy Now from Amazon
Product Information (more info)
CERTAIN CONTENT THAT APPEARS ON THIS SITE COMES FROM AMAZON SERVICES LLC. THIS CONTENT IS PROVIDED 'AS IS' AND IS SUBJECT TO CHANGE OR REMOVAL AT ANY TIME.

From the mid-1950s to the early 1970s, wild, idiosyncratic crime movies were the brutal and boisterous business of Nikkatsu, the oldest film studion in Japan. In an effort to attract youthful audiences growing increasingly accustomed to American and French big-screen imports, Nikkatsu began producing action potboilers (mukokuseki akushun, or borderless action) modeled on the western, comedy, gangster, and teen-rebel genres. This bruised and bloody collection represents a standout cross section of the nimble nasties Nikkatsu had to offer, from such prominent, stylistically daring directors as Seijun Suzuki, Toshio Masuda, and Takashi Nomura.

I AM WAITING (1957): In Koreyoshi Kurahara's directorial debut, rebel matinee idol Yujiro Ishihara (fresh off the sensational Crazed Fruit) stars a restaurant manager and former boxer who saves a beautiful, suicidal club hostess (Mie Kitahara) trying to escape the clutches of her gangster employer. Featuring expressionist lighting and bold camera work, this was one of Nikkatsu's early successes.

RUSTY KNIFE (1958): Rusty Knife was the first smash for director Toshio Masuda, who would go on to become one of Japanese cinema's major hit makers. In the film, Yujiro Ishihara and fellow top Nikkatsu star Akira Kobayashi play former hoodlums trying to leave behind a life of crime, but their past comes back to haunt them when the authorities seek them out as murder witnesses.

TAKE AIM AT THE POLICE VAN (1960): At the beginning of Seijun Suzuki's taut and twisty whodunit, a prison truck is attacked and a convict inside is murdered. The penitentiary warden on duty, Daijiro (Michitaro Mizushima) is accused of negligence and suspended, only to take it upon himself to track down the killers.

CRUEL GUN STORY (1964): Fresh out of the slammer, Togawa (Branded to Kill's Joe Shishido) has no chance to go straight because he is immediately coerced by a wealthy mob boss into organizing the heist of an armoured car carrying racetrack receipts. After gathering together a ragtag bunch to carry out the robbery, Togawa learns that all is not what it seems in Takumi Furukawa's thriller. Cue the double (and triple) crosses!

A COLT IS MY PASSPORT (1967): One of Japanese cinema's supreme emulations of American noir, Takashi Nomura's A Colt Is My Passport is a down-and-dirty but gorgeously photographed yakuza film starring Joe Shishido as a hard-boiled hit man caught between rival gangs. Featuring an incredible, spaghetti-western-style soundtrack and brimming with formal experimentation, this is Nikkatsu at its finest.

Eyes Without a Face (Criterion Collectio...