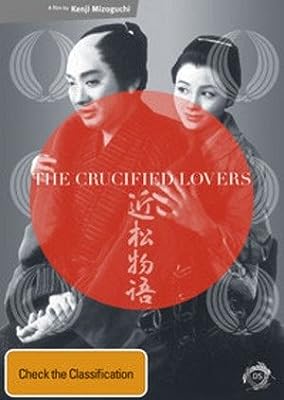 Price: $25.99
As of 2022-12-05 11:37:34 UTC (more info)
Product prices and availability are accurate as of 2022-12-05 11:37:34 UTC and are subject to change. Any price and availability information displayed on http://www.amazon.com/ at the time of purchase will apply to the purchase of this product.
Availability: Not Available - stock arriving soon
Buy Now from Amazon
Product Information (more info)
CERTAIN CONTENT THAT APPEARS ON THIS SITE COMES FROM AMAZON SERVICES LLC. THIS CONTENT IS PROVIDED 'AS IS' AND IS SUBJECT TO CHANGE OR REMOVAL AT ANY TIME.

Australia released, PAL/Region 4 DVD: it WILL NOT play on standard US DVD player. You need multi-region PAL/NTSC DVD player to view it in USA/Canada: LANGUAGES: Japanese ( Mono ), English ( Subtitles ), SPECIAL FEATURES: Black & White, Interactive Menu, Scene Access, Teaser(s), Trailer(s), SYNOPSIS: Master filmmaker Kenji Mizoguchi directs this tale of star-crossed lovers, based on a puppet play by Monzaemon Chikamatsu. Set in 1693 during a period of rigid feudal hierarchy and strict social customs, the film unfolds in the estate of a miserly scroll maker named Ishun (Eitaro Shindo). While Ishun busies himself by harassing a comely worker named Otama (Yoko Minamida), Ishun's wife, Osan (Kyoko Kagawa), is approached by her ne'er-do-well brother, Doki, who needs money. Knowing that there is no way that Ishun will agree to the loan, Osan turns to Mohei (Kazuo Shindo), Ishun's most trusted clerk, for help and he agrees to use his master's seal to allocate the funds. Caught in the act, he confesses though never implicating Osan. Ishun cruelly beats and humiliates his employee and locks him in the grain storeroom. A series of mistakes and misunderstandings lead to Ishun believing that his wife and his clerk are having an illicit affair. Mohei flees and Osan leaves soon thereafter, confirming Ishun's suspicions. The two escape first to Osaka then to the mountains around Lake Biwa, traveling first as lady and servant and later as lovers. SCREENED/AWARDED AT: Cannes Film Festival, ...The Crucified Lovers ( Chikamatsu monogatari )