Stanley Kramer Film Collection (Guess Who's Coming to Dinner / Ship of Fools / The Member of the Wedding / The Wild One / The 5,000 Fingers of Dr. T) 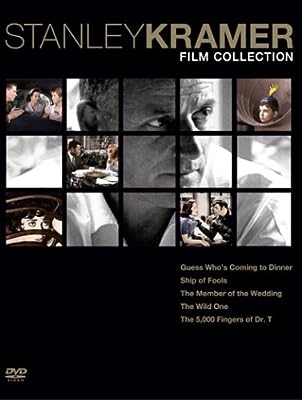 Price: $23.90
As of 2022-08-18 22:34:03 UTC (more info)
Product prices and availability are accurate as of 2022-08-18 22:34:03 UTC and are subject to change. Any price and availability information displayed on http://www.amazon.com/ at the time of purchase will apply to the purchase of this product.
Availability: Not Available - stock arriving soon
Buy Now from Amazon
Product Information (more info)
CERTAIN CONTENT THAT APPEARS ON THIS SITE COMES FROM AMAZON SERVICES LLC. THIS CONTENT IS PROVIDED 'AS IS' AND IS SUBJECT TO CHANGE OR REMOVAL AT ANY TIME.

Award-winning producer and director Stanley Kramer was on of the most respected filmmakers in Hollywood history. Contained within this 6-disc collectible box set are five of his greatest achievements: GUESS WHO'S COMING TO DINNER, SHIP OF FOOLS, THE MEMBER OF THE WEDDING, THE WILD ONE, and THE 5,000 FINGERS OF DR.T. Featuring newly recorded audio commentary and new interviews, featurettes and an exclusive, GUESS WHO'S COMING TO DINNER bonus disc jam-packed with informative new documentaries, rare photo galleries and more, THE STANLEY KRAMER COLLECTION is a five-star tribute to a motion picture legend.

Stanley Kramer is not just a name in film history but a virtual brand name for a subspecies of filmmaking. First as an independent producer (1948-54) and then as a producer-director (1955-79), Kramer specialized in movies with an insistent socio-political consciousness that addressed Big Subjects--racism, bigotry, McCarthyism, juvenile delinquency and violence, military justice, greed, historical guilt, fascism and collaboration, The Bomb--and sought to make them the stuff of instructive drama. Depending on one's disposition, a Stanley Kramer picture was either powerful or preachy, courageous or complacent, thought-provoking or manipulative, challenging or middlebrow, hard-hitting or heavy-handed. Whatever his profile, for the better part of two decades Kramer loomed large on the American cinema horizon as a fighting liberal and truth-seeker. His pictures won or were up for a lot of awards, and Kramer himself was oft nominated for Oscars. In 1961 the Academy's board of governors voted him the Irving Thalberg Award for his career as a producer.

As an introduction, Stanley Kramer Film Collection is a bit odd. Because Sony is the distributor, only films from the Columbia Pictures library could be included, which means many of Kramer's most celebrated titles weren't: e.g., The Defiant Ones, On the Beach, and Judgment at Nuremberg, all released through United Artists. Also, of the five pictures in the set, only two, Ship of Fools and Guess Who's Coming to Dinner, were directed by Kramer--though the commentaries, and especially the introductions by Karen Kramer (the producer’s second wife), treat him as prime mover on all of them.

By far the most interesting item is atypical Kramer--indeed, atypical anybody. The 5,000 Fingers of Dr. T (1953), co-written by Theodor "Dr. Seuss" Geisel, is a musical comedy horror fantasia centered on a little boy at the mercy of a demonic piano teacher. Mostly it takes the form of a nightmare: the opening sequence looks like something from '50s sci-fi, only creepier, while Dr. Terwilliker's labyrinthine headquarters, the principal setting, suggests the Arabian Nights episode of the German Expressionist classic Waxworks reconstituted in psychedelic Technicolor. Overall, the film scarcely seems to have been directed (the credited Roy Rowland goes unmentioned in the commentaries), and some of the song sequences are a drag. But Eugene Loring's ballet for musicians and instruments imprisoned in Dr. T's dungeon is memorably surreal, and Hans Conried makes a juicy Hitlerian villain. "Hitlerian" is no hyperbole: at the climax, as hundreds of little boys are marched off buses and stripped of their belongings before taking their places at Dr. T's stadium-sized keyboard, there's no mistaking the death-camp echo. Small wonder the movie spooked, rather than beguiled, the few families who bought tickets in 1953. Reviewers didn't like it, either. Nevertheless, it's won a cult over the years, and today's viewers should be more receptive to its dark whimsy. (They may even detect Dr. T DNA in Tim Burton's Willy Wonka and the Chocolate Factory!)

Of the other two early films, The Member of the Wedding (1952) boasts hefty credentials--direction by Fred Zinnemann (the same year he did High Noon for Kramer), a Carson McCullers novel and play as source material, the original Broadway cast re-creating their roles--but it's mostly an endurance test. Julie Harris had triumphed on stage as Frankie, the nervy, garrulous 12-year-old whose world in the Deep South of the 1940s has pretty much shrunk to her family's kitchen and the companionship of wise and patient mammy Bernice (Ethel Waters) and next-door kid John Henry (Brandon de Wilde in his first film role). On screen, Harris's real age (26) is distractingly apparent, and her voice, like Frankie's aggressive neediness, can be like fingernails on the blackboard. Although token efforts were made to "open up" the play for cinema, the film's setting and movement remain constrictive. Much more watchable is The Wild One (1953), directed by Laslo Benedek and based on Frank Rooney's chilling short story "Cyclists' Raid" about a motorcycle gang taking over a small town. Props to Marlon Brando, by then an annual Oscar nominee, for agreeing to re-team with Kramer (who had produced the actor's debut film, The Men) on what is essentially a 79-minute B movie. His reward was to become the premier icon of 1950s rebellion, pioneering the way James Dean, Elvis Presley, and others would follow. The Wild One also introduced biker hipster patter to movie audiences and defined biker fashion for decades to come. So the movie is a cultural milestone--but hardly a cinematic one: it rarely escapes feeling schematic and overcautious in its fear of alienating the public on one hand and glorifying violence on the other. Lee Marvin injects a welcome shot of battery acid as the leader of a rival biker gang, and veteran cinematographer Hal Mohr does yeoman work on dull sets.

The two specimens actually directed as well as produced by Kramer are his final bids for Oscar glory. Many Kramer pictures are only a few degrees away from allegory; Ship of Fools (1965), based on the novel by Katherine Anne Porter, sails over the brink with its complement of variously symbolic passengers and crew on a German vessel bound from Veracruz to Bremerhaven in the fateful year 1933. The heart of the film belongs to Simone Signoret and Oskar Werner, Oscar-nominated and also honored by the British Film Academy, the Golden Globes, and (Werner only) the New York Film Critics for their performances as two world-weary souls who briefly console each other en route to their respective dooms. Others in the cast include Michael Dunn (another Oscar nominee, as a dwarf Greek chorus), Vivien Leigh (her final performance, as a spiritual cousin of Blanche DuBois), Lee Marvin, George Segal, Elizabeth Ashley, Heinz Rühmann, and Jose Ferrer. Their roles are mostly die-cut, and although the black-and-white cinematography and art direction won Academy Awards, the film looks crude and stilted.

The intended centerpiece of the collection is Kramer's last critical and commercial hit, Guess Who's Coming to Dinner (1967). This is the one about the well-to-do, cozily liberal San Francisco couple--Spencer Tracy and Katharine Hepburn in their final screen pairing--suddenly confronted with the news that their daughter (Katharine Houghton, Hepburn's niece) has fallen in love with and intends to marry an internationally renowned doctor who happens to be black (Sidney Poitier, America's top box-office star that year). Kramer took an enormous risk that Tracy, in frail health, would live to finish the film; the beloved veteran actor did, but perished days afterward, lending the movie considerable poignancy. That undoubtedly contributed to the film's overall kindly reception by reviewers, even as some acknowledged its blatant contrivances. For one thing, Poitier's character is so encyclopedically admirable that the script makes a joke of it; and there's the totally arbitrary "necessity" of Poitier's catching a night flight to Europe, so that the two sets of parents have only an evening to get used to their offspring's proposed mixed-race marriage. Given four decades of social progress--and our generally weak sense of history these days--21st century viewers are likely to find the film quaintly anachronistic (and the high-school-play production values--phony scenic backdrops and instant-sunset lighting--don't help). In remarks recorded for the 40th-anniversary DVD, Steven Spielberg salutes Guess Who's Coming to Dinner as "social instrument" and "social entertainment." How instrumental it was in changing prejudiced minds is open to question, but as entertainment the film became identified with a moment in the history of racial consciousness in America.

There's an extra disc devoted to Guess Who's Coming to Dinner and Stanley Kramer's legacy, though oddly enough no running commentary has been provided on any of the movies except The Wild One (authoritative testimony by film historian Jeanine Basinger) and The Member of the Wedding (meandering remarks by Carson McCullers biographer Virginia Spencer Carr). Michael Feinstein and others offer droll appreciations of The 5,000 Fingers of Dr. T in peripheral featurettes. Visual quality of all the film materials is first-rate. --Richard T. Jameson