Sherlock Holmes - The Hound of the Baskervilles 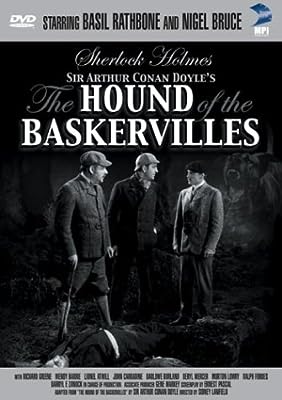 Price: $19.98
As of 2022-11-27 13:01:24 UTC (more info)
Product prices and availability are accurate as of 2022-11-27 13:01:24 UTC and are subject to change. Any price and availability information displayed on http://www.amazon.com/ at the time of purchase will apply to the purchase of this product.
Availability: Not Available - stock arriving soon
Buy Now from Amazon
Product Information (more info)
CERTAIN CONTENT THAT APPEARS ON THIS SITE COMES FROM AMAZON SERVICES LLC. THIS CONTENT IS PROVIDED 'AS IS' AND IS SUBJECT TO CHANGE OR REMOVAL AT ANY TIME.

The Hound Of The Baskervilles

The most celebrated tale of Sir Arthur Conan Doyle’s canon, ‘The Hound of the Baskervilles’ is set in the Victorian Age and was originally released by Twentieth Century-Fox in 1939. It is the first of fourteen Sherlock Holmes films starring Basil Rathbone and Nigel Bruce.

When Sir Charles Baskerville is killed outside of Baskerville Hall, his good friend Dr. Mortimer (Lionel Atwill) fears that the curse of the Baskervilles has struck once again. Mortimer enlists the help of Sherlock Holmes (Basil Rathbone), before yet another Baskerville can succumb to the evil legend.

Sir Henry Baskerville (Richard Greene) arrives in London to claim his inheritance. Mortimer takes Sir Henry to 221b Baker Street and expresses his fear for Sir Henry’s life. Baskerville soon learns that along with the grand mansion on the moor, comes a devilish curse, a curious butler (John Carradine) and a cast of bizarre neighbors.

Holmes, pressed with "other business," sends Dr. Watson (Nigel Bruce) to accompany Sir Henry to the dreary moor to protect the young Baskerville from the legend of the wicked hound. Of course, with danger afoot, Sherlock Holmes may not be so far from the scene as is assumed.

Basil Rathbone and Nigel Bruce star in this 1939 adaptation of Sir Arthur Conan Doyle's frequently filmed novel, and the result is one of the most atmospheric and purely enjoyable versions of The Hound of the Baskervilles. Except for minor changes, the script is true to Doyle's enthralling mystery about a centuries-long curse against heirs to the Baskerville estate, situated within the haunting and deadly Dartmoor in the southwest of England. With the arrival of a new master, Canadian Henry Baskerville (Richard Greene), Sherlock Holmes (Rathbone) and Dr. Watson (Bruce) are called upon to solve the strange case of the "gigantic hound" that may be readying to savage the poor fellow. Wonderful sets, crisp performances, and Rathbone's accessible but no-nonsense take on the Great Detective make this a real delight. Typical of the 20th Century Fox Holmes pictures, there's an in-joke, a final line of censor-defying dialogue alluding to Holmes's little problem with cocaine. --Tom Keogh