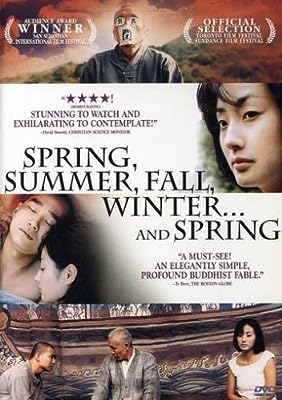 Price: $9.98
As of 2022-07-01 10:21:08 UTC (more info)
Product prices and availability are accurate as of 2022-07-01 10:21:08 UTC and are subject to change. Any price and availability information displayed on http://www.amazon.com/ at the time of purchase will apply to the purchase of this product.
Availability: Not Available - stock arriving soon
Buy Now from Amazon
Product Information (more info)
CERTAIN CONTENT THAT APPEARS ON THIS SITE COMES FROM AMAZON SERVICES LLC. THIS CONTENT IS PROVIDED 'AS IS' AND IS SUBJECT TO CHANGE OR REMOVAL AT ANY TIME.

A tiny Buddhist monastery floats on a raft amidst a breathtaking landscape, tended to by a solitaryMonk. Into this serene setting comes a young child, who will become the Old Monk's protege... and so begins a lifelong journey of hope, despair, passion and redemption in a film hailed as "A triumphof sheer cinematic craft," (Rene Rodriguez, Miami Herald). From the brash actions of youth, through the dawn of adolescence and the fullness of adulthood, one man's life lessons are learned as seasons pass, his emotional inner life changing as the landscape around him. Award-winning Korean writer/director/editor Kim Ki-duk has crafted a lushly exotic, yet universal story about the human spirit and its evolution, from Innocence to Love, Evil to Enlightenment, and ultimately to Rebirth that Elizabeth Weitzman of the New York Daily News calls "A beautifully composed canvas, the sort of film one falls into, resurfacing at the end with great reluctance."

Working miracles with only a single set and a handful of characters, Korean director Kim Ki-Duk creates a wise little gem of a movie. As the title suggests, the action takes place in five distinct episodes, but sometimes many years separate the seasons. The setting is a floating monastery in a pristine mountain lake, where an elderly monk teaches a boy the lessons of life--although when the boy grows to manhood, he inevitably must learn a few hard lessons for himself. By the time the story reaches its final sections, you realize you have witnessed the arc of existence--not one person's life, but everyone's. It's as enchanting as a Buddhist fable, but it's not precious; Kim (maker of the notorious The Isle) consistently surprises you with a sex scene or an explosion of black comedy; he also vividly acts in the Winter segment, when the lake around the monastery eerily freezes. --Robert Horton